sign a memorandum of understanding to build a better relationship between Hebei Province and Nebraska.

HEBEI PROVINCE, CHINA – Wednesday, Lt. Governor Mike Foley and Director Wang of Hebei Province Department of Human Resources signed a memorandum of understanding to increase exchange of information and build a better relationship between Hebei Province and the State of Nebraska.  Hebei is an important center of agriculture and industry in Eastern China.

During his meeting with Director Wang, Lt. Governor Foley welcomed Hebei officials to come visit Nebraska and asked for support from the provincial government in promoting Nebraska as a destination for investment.  Both sides expressed their desire to increase trade, exchange ideas, and work together to develop better relations.

In addition to attending the China Agricultural Fair, Lt. Governor Mike Foley has been meeting with business and government representatives from across China to build relationships and encourage more business and investment in Nebraska.  The Lt. Governor will travel to Shanghai on November 9th, and return to the United States on November 11th. 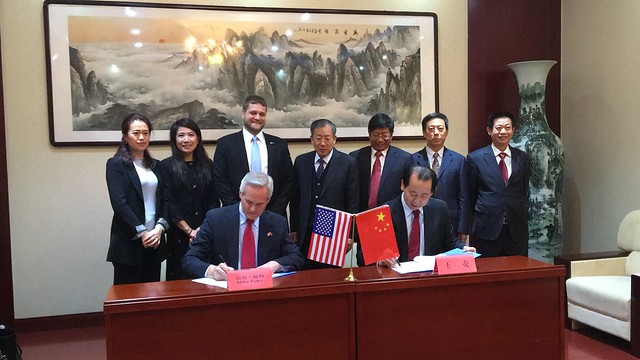