“Today’s proclamation is a symbol of appreciation for the sacrifices of the men and women who have served to defend our country,” said Governor Ricketts.  “Thank you to our Pearl Harbor survivors and their families for being here today.  It is humbling to think these men witnessed and were a part of one of America’s most historic and defining moments.  It is a distinct honor to meet with them and sign this proclamation in celebration of their bravery.”

The attack on Pearl Harbor, which launched the United States’ involvement in World War II, took place 76 years ago and claimed the lives of over 2,400 Americans.  According to the governor’s proclamation, flags are to be flown at half-staff in accordance with federal law.  Citizens are encouraged to observe appropriate ceremonies and activities in appreciation of the sacrifices of those who served in World War II.

“Things happened so fast on that Sunday morning. First, we could smell the flowers in the air. It was the South Pacific, Sunday morning sunshine and everything. Five minutes later, we couldn’t smell flowers. We could smell burning oil and gasoline, and it was all chaos,” said Survivor Walter Barsell. After the attack, Americans ‘got together,’” he went on. “We don’t want to go through anything like that again, but I would like to see us get together.”

Walter Barsell was on shore duty for the U.S. Navy in the Receiving Station Barracks when the attack on Pearl Harbor took place.  Walter and others were told to run as they had no weapons, and after hiding in a pineapple field, he returned to the docks to clear debris and help survivors from the water.  Walter was then assigned to the entrance of Pearl Harbor for underwater sound detection.  After serving six years in the U.S. Navy, Walter returned to Nebraska where he worked for Hinky Dinky.

Ed Guthrie was an electrician mate on the USS Whitney, docked in Pearl Harbor the day of the attack on December 7, 1941.  Sitting on deck reading a comic book, he saw the Japanese planes approach and drop their bombs and watched them hit the other ships.  Ed spent three days picking up survivors and bodies in the oily water.  He went on to serve on the USS Banner and participate in the atomic bomb tests at Bikini Atoll.  He was discharged from the Navy after six years and returned to Omaha where he was an electrician at OPPD.

Melvin Kennedy served on the USS Rigel, which was docked at Pearl Harbor the day of the attack.  Melvin spent three days after the attack searching for survivors and bodies in the harbor.  Melvin also served on the USS Clark, taking care of the ship’s lifeboats and manning the pointer position on an antiaircraft gun while heading to the Marshall Islands and Gilbert Islands.  After serving six years in the U.S. Navy, Melvin returned to Nebraska where he was a farmer and a mechanic. 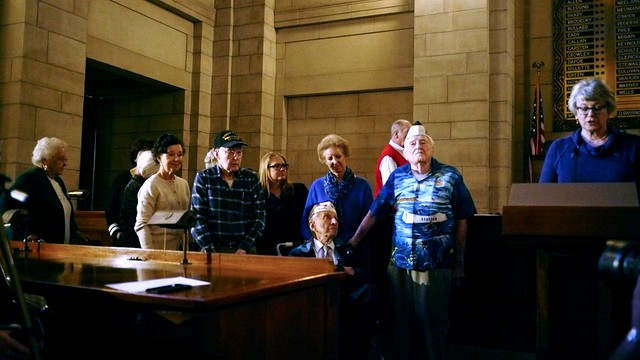