OMAHA – Today, Governor Pete Ricketts announced Nebraska had earned Site Selection magazine’s top national award for the state’s economic development successes in 2016.  According to Site Selection, “Ricketts joins the elite club of US governors to claim a Site Selection Governor’s Cup, by virtue of his state winning the Cup for most capital investment projects per capita — 101 such projects for 2016.”

“Thank you to Site Selection magazine for this special recognition of how Nebraska is growing,” said Gov. Ricketts.  “Our business-friendly regulatory environment, high labor force participation rate, competitive power rates, and quality infrastructure combine to create an attractive environment for job creators and entrepreneurs.  Above all things, I know from personal experience in hiring Nebraskans that our people are our biggest competitive advantage.  Economic development is a competitive environment, and we must continue to work to build new competitive advantages to keep Nebraska the best place in the world to live, work, and raise a family.”

Site Selection magazine noted the state’s high labor force participation rate, quality education system, and reliable power sources as additional incentives for companies to relocate and expand in Nebraska.  Nebraska has the second highest labor force participation rate in the nation.  Nebraska has also earned recognition as a top 10 state for affordable power and has the second highest high school graduation rate in the nation.

“Nebraska consistently works on recruiting and growing companies to add depth to our state’s high performing industries,” said Department of Economic Development Director Courtney Dentlinger.  “Economic developers at both the state and local levels understand the importance of teamwork to grow new opportunities for Nebraska, whether it’s attracting ethanol plants to support alternative energy or developing our manufacturing and information technology sectors.”

Site Selection also named the City of Omaha number one in its 2016 Top Tier 2 Metro Areas for Corporate Project Attractions and Expansions.

“Congratulations to Greater Omaha.  This is well-deserved recognition of your work to make Omaha an attractive home for job creators and entrepreneurs,” said Gov. Ricketts. “Omaha and the surrounding communities are growing thanks to the hard work of many private and public sectors leaders who are working together to ensure Omaha and Nebraska remain the best places in the world to live, work, and raise a family.”

“This ranking is the latest example of what it means to accomplish more together: our partner counties collaborating across state lines, working with city leaders and Nebraska and Iowa Departments of Economic Development to grow our existing businesses, attract new companies and new jobs, and enhance our total quality of life,” said President and CEO of the Greater Omaha Chamber David G. Brown.

Additionally, the Sioux City MSA, which includes South Sioux City and the counties of Dixon and Dakota, is also celebrating a first place win in their population category.

Since 1978, the Governor’s Cup has honored states with the most qualifying new and expanded facilities.  Nebraska won the magazine’s competition in 2013 and placed second in 2015.  According to Site Selection, “The Governor’s Cups reflect yearly project totals as tracked by the Conway Projects Database.  Qualifying projects must meet one or more of these criteria for inclusion in the database: a minimum capital investment of $1 million, 20 or more new jobs created, and 20,000 or more square feet of new space.” 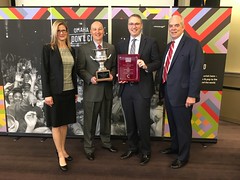 Site Selection magazine is the recognized leader in reporting on corporate real estate strategy and area economic development, as well as extensively covering domestic and global business climate issues.  The magazine, based in Atlanta, Ga., has awarded the Governor’s Cup yearly since 1978 to the U.S. state with the most new and expanded corporate facilities as tracked by Conway Data’s New Plant Database.  In 2014, it added new criteria to its national rankings system to account for smaller and more sparsely populated states that still maintained high caliber economic development agencies and recorded investment successes.