Flags to fly at half-staff.

“Governor Thone was a man of integrity who provided stable leadership as Nebraska endured a national recession.  While we mourn his passing, the people of Nebraska will remember his legacy of fiscal responsibility as Governor of Nebraska and Congressman.  Our thoughts and prayers are with Ruthie and the entire Thone family as the state honors a true public servant,” said Governor Pete Ricketts.

"Governor Thone's leadership and character shaped our state and the countless Nebraskans he worked with during his public service at the state and federal level.  Everyone he came in touch with experienced his gentlemanly manner and deep integrity.  Susan and I are praying for the Thone family as they celebrate and honor their husband, father, and loved one,” said Lt. Governor Mike Foley.

“Nebraska has lost a dedicated public servant today.  Governor Thone's early years of service to our state began after law college as an assistant attorney general before becoming an assistant U.S. District Attorney.  His commitment to the law and our state led him to serve throughout his life in many capacities, ultimately leading him to be considered a distinguished elder statesman.  He was regarded by many for his depth of understanding for the concerns of Nebraska and served his state well,” said Attorney General Doug Peterson.

“My career in politics and government would not have been possible without Charley Thone’s support and wise counsel.  He was a very smart, down-to-earth Nebraskan who presidential candidates from Goldwater to Reagan sought out for common sense advice as they campaigned for our nation’s highest office.  He will be greatly missed by the many Nebraskans whose lives he touched for the better,” said State Treasurer Don Stenberg, who served as an aide to Governor Thone.

"Charley Thone served our state with high distinction as a U.S. Congressman for the First District and as Nebraska Governor.  He was an able administrator, a distinguished lawyer, a dedicated public servant, a man of integrity, and a consummate gentleman.  He had friends in every corner of the state, and engaged everyone he met with warmth, respect, and good humor.  His ennobling spirit and sage advice were well known,” said Secretary of State John Gale.

"I'll always remember Governor Thone as one of my favorites because we had the same name and he's the first Governor I ever saw in person at a Fremont parade.  When walking the route, he said 'hi' to me and I said 'we have the same name.'  He said you might well have a future in politics and smiled.  For a young Nebraskan, it was an inspiring moment that made a big impression.  Ellen, the kids, and I send our thoughts, deep condolences, and sincere prayers to Ruthie and the Thone family,” said Auditor Charlie Janssen.

GOVERNOR THONE’S SERVICE TO THE PEOPLE OF NEBRASKA

Thone was born in Hartington in Cedar County, Nebraska on January 4, 1924.  He received his Juris Doctor from the University of Nebraska-Lincoln Law School in 1950 and was subsequently admitted to the Nebraska Bar.  Thone also served in the U.S. Army infantry during World War II as an officer.

Thone married Ruth Raymond in August 1953, and they had three daughters.

From 1959-1962, Thone served as the State Chairman for the Nebraska Republican Party.  From 1971 to 1979, he served as a member of the United States House of Representatives for Nebraska’s First Congressional District.

In 1978, Thone was elected as Nebraska’s 34th Governor, serving one term.  As Governor of Nebraska, he was the first governor to support Ronald Reagan for President of the United States.  When asked about his legacy recently, Thone cited higher education funding and that he was able to positively affect the lives of Nebraskans as his greatest successes.  In 1979, he vetoed an attempted repeal of the death penalty by the Nebraska Legislature.

After leaving public service, Thone stayed active practicing law and government affairs, getting involved in his community, and supporting candidates for public office.

In 2010, Thone rallied Nebraska Governors to make the case to the people of Nebraska for retaining the State Treasurer’s Office.  His efforts worked, and an attempt to abolish the office failed on the ballot with 146,935 votes for abolishing and 299,882 votes against.

Thone was a former President of Lincoln Rotary, a past president of the National Conference Bar Foundation, former Vice President of the Council of State Governments, former Lincoln American Legion Commander, past Lincoln Chamber of Commerce Chairman as well as a Lincoln Elks Lodge 80 member and Veterans of Foreign Wars (Hartington) member.

Governor Thone is survived by his wife, former First Lady Ruth Thone and his daughters Marie, Amy, and Anna.

In his first State of the State address to the Legislature in 1979, Governor Thone laid out a vision for budget restraint and running a more efficient government: “[T]here are those who only lately have come to realize that the resources of state government are limited, and there are those who have only recently come to recognize that there are limits not alone on our resources but on what government can effectively do.”  This philosophy would underlie his approach to running state government throughout his administration.

During his 1980 State of the State address, Thone further remarked that, “As I travel throughout the state and talk with many Nebraskans, I pick up one underlying theme—people want less government, not

more; fewer laws, not more; and less regulation, not more.”

Even while placing a focus on fiscal restraint, Thone identified several priorities which he consistently worked to achieve.  Following an international trade mission, he proposed trade offices in Tokyo and Frankfurt to help elevate Nebraska’s international profile.  Under his leadership, Nebraska invested in corrections and placed an emphasis on preparing inmates for re-entry.  In the opening years of Thone’s governorship, biofuels experienced a period of significant growth, and he supported further growth by utilizing biofuels in state vehicles – an initiative he touted during his 1981 address to the Legislature.

In his final State of the State address in 1982, Thone highlighted some of the achievements he made during his term of as Governor.  “Just like an individual, a family or a business, your state government must discipline itself to live within its means. And this budget does just that,” he said.  Those successes included cutting spending increases in half; reducing individual income tax rates; avoiding tax increases by controlling spending; and reducing the number of state employees. 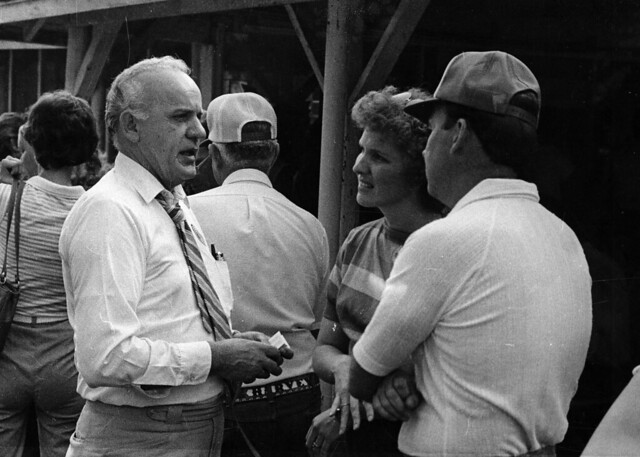