“The formalization of our sister-state relationship with Shaanxi Province is the fruit of years of labor,” said Governor Ricketts.  “As our partnerships have proven, Shaanxi and Nebraska have many common interests and mutually beneficial synergies.  Our relationship with Shaanxi is helping raise Nebraska’s profile in China, our fourth largest and fastest-growing trading partner.  Thanks to the work of the business community and University of Nebraska, this sister-state relationship has the potential to grow and produce new opportunities for years to come.”

The State of Nebraska’s relationship with Shaanxi Province has resulted in investment capital and educational partnerships over the past few years.  Investments and partnerships between Nebraska and Shaanxi include:

All of these continued engagements with Shaanxi Province have displayed Nebraska’s commitment to this sister-state relationship, leading to this week’s official recognition of the relationship with the province.

"The Sister-State Agreement opens a new chapter in our relationship,” said Governor Hu Heping.  “I hope that this will establish closer collaboration and utilize each other's advantages to strengthen cooperation in agriculture, investment, trade, culture, education, medicine, and other areas to create a model for Sino-American cooperation."

The capital city of Shaanxi Province is Xi’an.  Shaanxi Province is home to the first emperor of China, Qin Shi Huang and his famous Terra Cotta Army.  Along with the mutual investment between Nebraska and Shaanxi Province, they also share geographical similarities: Shaanxi is located in central China while its terrain consists mainly of plains and has a major river, the Yellow River, running across its eastern border, much like Nebraska.  It has also traditionally been considered part of the breadbasket of China. 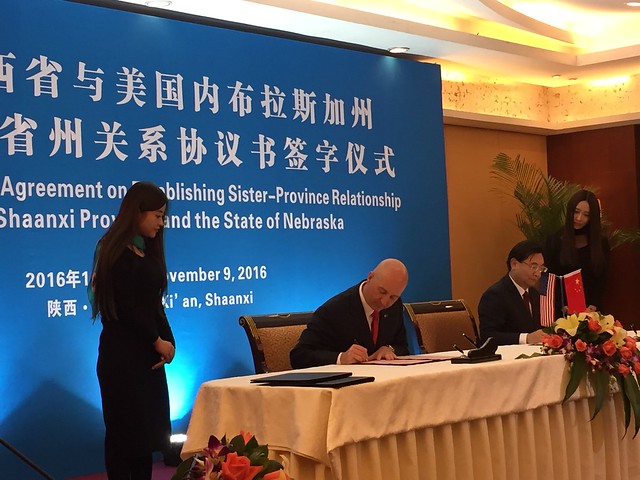