veteran, to the Nebraska State Capitol.

LINCOLN – Today, Governor Pete Ricketts and the Nebraska Department of Veterans’ Affairs (NDVA) welcomed World War II (WWII) veteran Sidney Walton to the Nebraska State Capitol.  Mr. Walton is one of the United States’ oldest WWII veterans and is currently visiting every state capitol over the next year.

“Our World War II veterans, like Sidney Walton, are ‘The Greatest Generation,’ that bravely served our country at a time when freedom was under siege around the globe,” said Governor Ricketts.  “Sidney’s travels to all 50 states will help reconnect Americans with the history behind the war, and the heroes who were a part of it.  It was an honor to host Sidney here in Nebraska, and we wish him well as he travels the nation.”

“Mr. Walton's tour is raising awareness that time is running out to connect with veterans from the ‘Greatest Generation’ and memorialize their stories and the wisdom they have to pass down," said NDVA Deputy Director John McNally.  “Today's event was a reminder to reach out and make connections with the veterans in our communities.  Our agency meets amazing men and women every day and has the honor of serving them.  I highly encourage everyone to reach out to the veterans in your lives.”

Mr. Walton was born in 1919 and grew up in New York City.  He served for five years in the U.S. Army, enlisting in 1941 and serving until WWII ended.   He later graduated from Virginia Polytechnic Institute and State University with a degree in geology and eventually went on to teach at Duke University and North Carolina State University.  The purpose of Mr. Walton’s “No Regrets Tour” is to provide those throughout the country an opportunity to meet a WWII veteran in person.  A full background on Mr. Walton and his story can be found here.

Below are a few statistics about Nebraska’s WWII veterans: 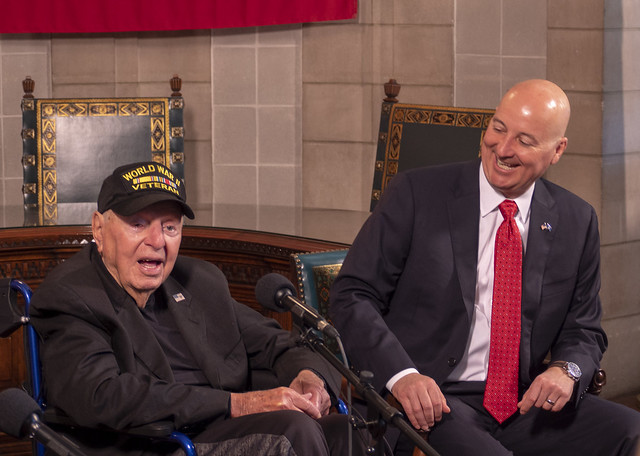