“Israel is one of Nebraska’s greatest friends, and a growing market for our quality products,” said Governor Ricketts.  “This partnership is expanding opportunities for both the people of Nebraska and Israel.  Thank you to Minister Ariel for visiting Nebraska to discuss how we can grow our relationship even further.”

Governor Ricketts and Minister Ariel discussed the recent reintroduction of U.S. beef to Israel during their meeting.  They also discussed opportunities for increased collaboration in the agro-tech industry.

“Many of my colleagues have understood the map of the USA to be centered around major cities like Washington, New York City, Los Angeles, Miami, etc.,” said Minister Ariel.  “I have understood that the challenges of climate and water and food protection and production are bringing back in centrality the importance of America’s heartland as well as Israel’s opportunity for new and stronger cooperation with America’s leading agriculture states.”

In 2016, Nebraska exported the first significant shipment of beef from the United States to Israel since 2003.  The opening of the export market spurred a plant expansion by WR Reserve and the creation of 100 new jobs.

Nebraska Department of Agriculture (NDA) Assistant Director Mat Habrock traveled with Lt. Governor Mike Foley to Israel in 2016 to celebrate the reopening of the U.S. beef market and welcome beef from Hastings, Nebraska into Israel.

“It was an honor to meet with Israeli Minister of Agriculture Uri Ariel today to discuss our shared vision of a strong agriculture sector,” said NDA Assistant Director Mat Habrock.  “Israel and Nebraska are both interested in being leaders in agriculture production through the development and implementation of technology, particularly in water use.  Additionally, Israel is a great trading partner for Nebraska’s agricultural products.”

“We appreciate our state’s robust, mutually-beneficial trade relationships with Israel, both in terms of agriculture and other industries,” said Nebraska Department of Economic Development Director Dave Rippe.  “We look forward to working to deepen these connections, and we eagerly anticipate attending this year’s Agritech Israel exhibition in Tel Aviv to discuss new horizons for collaboration. It was a privilege to meet with Minister Ariel this afternoon to discuss strengthening our bonds for the future.” 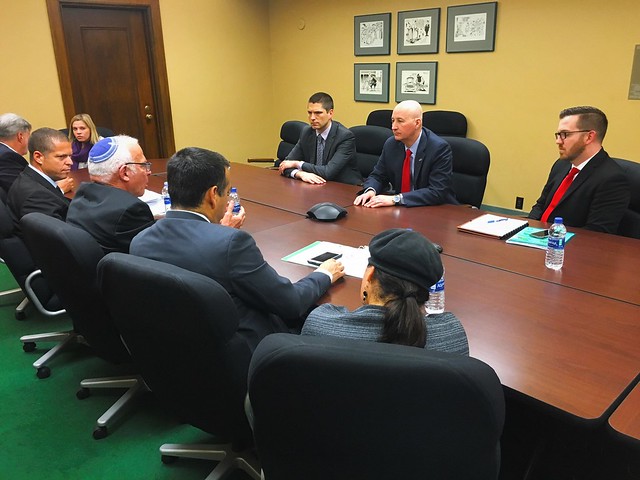