Governor Ricketts met with the Indonesian delegation to discuss how Nebraska and Indonesia can deepen their relationship.

“Nebraska and Indonesia not only share important trade relationships, but also partner to address global challenges related to food shortage, water conservation, and land use,” said Governor Ricketts.  “The State of Nebraska and the University of Nebraska will continue working together to deepen our trade and research ties.”

Nebraska exported around $82 million in products to Indonesia in 2016, over three-quarters of which were agricultural or food-related, such as beef, soybeans, and animal feed.  Indonesia has the world’s fourth-highest population, which is expected to increase to 322 million by 2050, giving Nebraska products great growth opportunities.  The population’s consumption of beef, for example, is anticipated to double.

Consul General Chalid expressed her country’s desire to deepen the trade and investment relationships between Indonesia and Nebraska.

"Indonesia would like to develop more strategic trade partnerships with Nebraska, as well as seek potential products for export and import cooperation on both sides,” the Consul General said.

“To familiarize themselves with Indonesia’s best products, as well as to explore trade and investment opportunities and establish networking with Indonesian business leaders, I would like to invite Nebraska businesses to attend the 33rd Trade Expo Indonesia on October 24-28, 2018,” the Consul General said.

Nebraska and Indonesia share a history of collaboration.  With half of Indonesia covered in pristine natural forests, its government is committed to maximizing local agricultural yields to support the growing population, while minimizing impacts to the environment.  Nebraska’s agricultural expertise has been valuable to this effort.

In 2016, Indonesia’s Ministry of Agriculture recruited researchers from the University of Nebraska-Lincoln (UNL), led by agronomist Patricio Grassini, to deploy a cutting edge technique used in countries around the world to increase crop production.  The “Global Yield Gap Atlas,” developed by UNL’s Institute of Agriculture and Natural Resources (IANR), can estimate gaps between crop potential and actual yields on a given piece of land, based on soil and water conditions.  This helps researchers identify regions with the greatest potential for crop intensification.  It can also help governments gain a better understanding of quantities of food that can be grown at home, versus amounts that need to be imported.  Today, the Atlas is being used in at least 15 Indonesian provinces to intensify rice and corn production.

In 2016, researchers from Indonesia’s Agency for Agriculture Research and Development visited Lincoln for a six-week agricultural training program, learning about techniques such as crop modeling and soil analysis, and interacting with farmers and equipment manufacturers to gain firsthand experience.

“The research partnerships that have evolved between Indonesia and Nebraska have been invaluable in our efforts to ensure a sustainable, secure food system to support our growing population, while safeguarding our environment,” said Chalid. “They have also helped all parties involved gain more expertise working together to solve problems that impact the world as a whole.”

Following a meeting with Governor Ricketts and a press conference, Ms. Chalid and her delegation visited with representatives from IANR, LI-COR Biosciences, and the U.S. Grains Council.  Topics centered on strengthening the trade and agricultural partnerships between Indonesia and Nebraska. 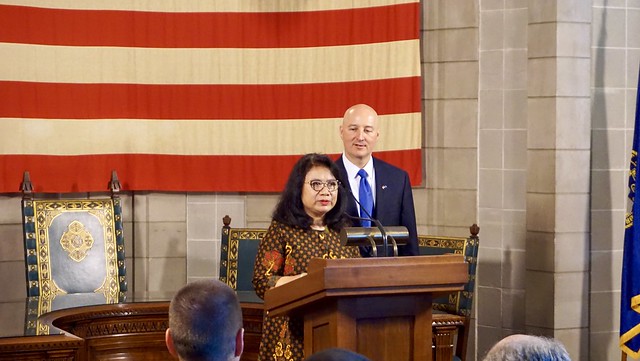