HONG KONG – Today, Governor Pete Ricketts announced that his trade mission to China, Hong Kong, and Macau led to the signing of nine agreements to bolster markets for Nebraska beef and pork.  The trade delegation included state officials from the Nebraska Department of Agriculture (NDA), Nebraska Department of Economic Development, farmers and ranchers, and representatives from the University of Nebraska and Nebraska businesses.

“With China’s growing middle class, there are many opportunities here for Nebraska farmers and ranchers to grow markets for our high-quality commodities and food products,” said Governor Ricketts.  “Signing letters of intent with representatives from nine successful businesses and restaurants in China, Hong Kong, and Macau keeps Nebraska growing and helps the state’s farm and ranch families for many years to come.”

This trade mission followed a recent announcement by Chinese officials about their plans to reopen the beef trade between China and the United States.  China had previously banned importation of American beef in 2003.  Hong Kong has purchased and promoted Nebraska beef and continues to expand their markets.  In 2015, Hong Kong was Nebraska’s sixth largest export market, accounting for $234 million in goods purchased from our state with approximately 80 percent being exported food products.

“To prepare for China’s first purchases of U.S. beef in more than a decade, Nebraska officials are working closely with the U.S. Trade Representative’s office,” said NDA Director Greg Ibach.  “We want to be ready and able to take advantage of the opportunity when it happens.”

Highlights of the delegations’ agriculture-related activities during the trip include:

Shanghai: The delegation met with the owner of Yue 6 Cuisine & Lounge, a progressive, fusion-style restaurant serving U.S./Nebraska pork to sign a letter of intent to purchase more U.S. and Nebraska pork.

Macau: The delegation attended the annual Nebraska BBQ at the Studio City Hotel in Macau where 350 food industry representatives were there to see firsthand the advantages of using beef and pork from Nebraska.  Angliss Macau Food Service Limited signed a letter of intent to purchase Nebraska beef and pork.

On the last day of the trade mission, delegates enjoyed lunch at the Nebraska Steakhouse in Hong Kong where officials signed a letter of intent to purchase and promote additional Nebraska beef. 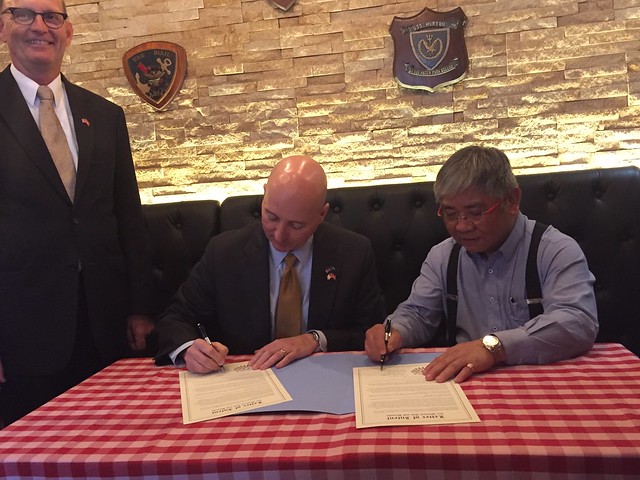