LINCOLN – Today, Governor Pete Ricketts congratulated more than a dozen troopers and civilians with the Nebraska State Patrol (NSP) for their parts in two major recent drug busts.  NSP made national news in April for the seizures, which combined pulled drugs carrying an estimated street value of $25 million off Nebraska roads.

“This is exceptional work by our Nebraska State Troopers,” said Governor Ricketts.  “These two drug busts demonstrate the teamwork and skill of our troopers who constantly work to keep Nebraska safe.”

On April 18, troopers seized 1,853 pounds of marijuana during a traffic stop in Fillmore County.  On April 24, troopers seized what was originally thought to be 73 pounds of cocaine and 44 pounds of fentanyl during a traffic stop in Buffalo County.  Further testing by the Nebraska State Patrol Crime Lab has confirmed that the entire seizure is fentanyl.  The total weight of 118 pounds makes the seizure the largest in Nebraska history and one of the largest ever recorded in the entire country.

“More than 100 people die every day in the United States from an opioid overdose,” NSP Superintendent Colonel John Bolduc.  “Without question, seizures like this save thousands of lives.”

From January to April of 2018, NSP’s drug seizures are pacing ahead of recent years for a number of controlled substances.  Troopers have seized more than 4,300 pounds of marijuana, which exceeds yearly totals for every year since 2012. NSP has also seized more than 90 pounds of methamphetamine in 2018, which outpaces every other year on record.

“These drug seizures are the result of diligent police work and excellent teamwork by our troopers,” said Colonel Bolduc.  “From the first contact during a traffic stop to testing at the NSP Crime Lab, our team takes great pride in their professionalism and dedication to public safety.” 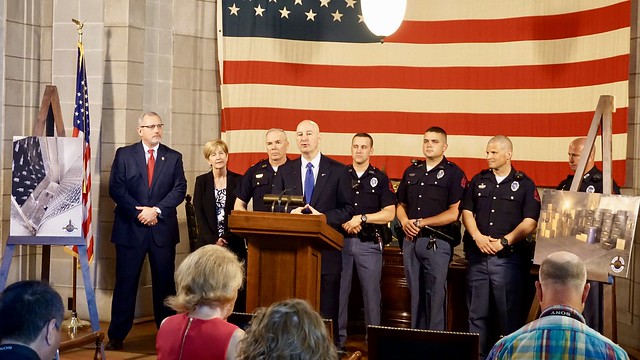