LINCOLN – Today, Governor Pete Ricketts and state agencies outlined their plans ahead of the Great American Eclipse on August 21, 2017.  A total solar eclipse, a rare event, will be visible across Nebraska and is predicted to bring as many as half a million visitors to the state to see the rare occurrence.  For a short period of time, the moon will block out the sun’s light, across approximately 468.4 miles of Nebraska, from the border with Wyoming to Falls City.  Large crowds, long lines, and heavy traffic are expected at eclipse events in the path of totality across the state.

“We are excited to welcome visitors from around the globe to beautiful Nebraska to witness this rare phenomenon as it crosses our great state,” said Governor Ricketts.  “The wide open spaces of Nebraska offer great viewing locations.  We invite visitors to come to Nebraska and make a weekend of the event by visiting communities across the state which are hosting great events.  Ahead of this weekend, we are also encouraging Nebraskans to prepare for heavy travel across the state, and to make their eclipse viewing or regular work plans accordingly.”

Gov. Pete Ricketts has asked the Nebraska Emergency Management Agency (NEMA) to coordinate with other state agencies to prepare for the anticipated crowds, so Nebraskans and tourists alike have a safe and enjoyable experience before, during, and after the eclipse.

Plans from state agencies are outlined below.

NEMA is coordinating with other state agencies on the planning and preparation for the eclipse to ensure that Nebraskans and visitors can safely and effectively enjoy the event.

“In emergency management we prepare for the worst and hope for the best,” said NEMA Operations Manager Earl Imler. “By considering challenges that could arise with the influx of the predicted 100,000 to 400,000 visitors to the state, we have developed plans for helping local jurisdictions in the path of totality should any of those incidents occur.”

The state is using the same system used to prepare for weather disasters or wildfires ― the Incident Command System ― to respond to the event.  The State Emergency Operation Center (SEOC) at NEMA will be staffed by representatives from many state agencies on August 21, 2017 to provide any necessary support to local communities.

“Local emergency managers will get support or assistance from the SEOC if a situation arises in their area of the state,” Imler said.  “In addition, the state’s Joint Information Center will also be open in the week prior to the event and on the day of the eclipse to send out important information updates to the public.”

For information and links to other state agency and federal websites with eclipse information visit: https://nema.nebraska.gov/operations/2017-solar-eclipse.

DHHS’ public information staff have developed a number of public safety announcements for release to radio stations in the days leading up to the eclipse.  DHHS staff will support the Joint Information Center and will work in the SEOC on the day of the event.

“As Nebraska is a prime viewing location, we all anticipate large crowds, which may cause heavy traffic on Nebraska interstates and highways the day of the solar eclipse.  As many local communities have planned weekend events, large crowds may be possible over the weekend leading up to the actual day of the eclipse,” said DOT Director Kyle Schneweis.  “If you are interested in seeing the eclipse, we recommend planning well in advance so you can avoid the anticipated traffic.”

Please follow these tips to drive safely on the day of the solar eclipse:

Nebraska Fire Marshal Jim Heine has some fire safety reminders for those planning to view the total eclipse, since Nebraska is in the heart of wildfire season and conditions are extremely dry.  To help maintain everyone’s safety, please remember the following:

The Nebraska Game and Parks Commission will offer opportunities for people to view the solar eclipse at 34 state park areas and 186 wildlife management areas across the state.

Game and Parks is committed to making this event as safe and orderly as possible for those wishing to experience the eclipse. While all reserved campsites at Game and Parks areas within the path of totality have been booked for several months, several state park areas are preparing additional areas to allow for primitive camping and parking during the eclipse.

Crowds are expected to be larger than normal and park visitors are encouraged to buy their park entry permits before the event.  Nearly two dozen eclipse-related events are planned a state park areas across the state.  Visit www.outdoornebraska.org for a list of special events, safe-viewing information, and an interactive map of state park areas within the path of totality.

The Nebraska Military Department has put Nebraska National Guard resources on standby to support a response should one be needed on the day of the eclipse.  The National Guard Joint Operations Center will be stood up on the day of the eclipse and working in coordination with the SEOC.  The public affairs staff will coordinate with other public information officers in the State Joint Information Center, sending out up-to-date information to the public and media.

The NSP is encouraging all Nebraskans and visitors to help keep roads safe before, during, and after the eclipse by voluntarily complying with traffic safety laws.  NSP will have additional troopers working around the eclipse, paid for in part by a grant from the Nebraska Department of Transportation Highway Safety Office (NDOT-HSO).

The NSP Aviation Support Division will provide assistance throughout the state with three aircraft operating during the event to help with traffic flow and other calls for service.

NSP’s public relations director will be embedded with troopers to provide real-time information on traffic flow and safety information via social media and other resources.  NSP is also working with local law enforcement to assist their needs leading up to, during, and after the eclipse, as many local communities will see an influx of visitors.

“We want everyone to be able to enjoy this once-in-a-lifetime event safely,” said Major Russ Stanczyk, acting superintendent of the Nebraska State Patrol.  “With high visibility patrols and more troopers on the road throughout the state, NSP will partner with other state agencies and the public to keep Nebraska roads safe.  We encourage all motorists to follow traffic safety laws, wear seat belts, and never drive impaired or distracted.”

The Nebraska Tourism Commission has been working with communities across the state for more than a year to plan and prepare for the eclipse and the visitors it will bring from around the world.

The eclipse has been a key element of Nebraska Tourism’s marketing program during the past year, and many communities across the state have received grants from the Commission enabling them to showcase the pre- and post-events they have planned.

“This is an exciting time for Nebraska,” said John Ricks, director of the Nebraska Tourism Commission.  “We hope to provide an unforgettable experience for our visitors.  Right now, many hotels and campsites within the path of totality are full, but it is always a good idea to call and check as there may be cancellations.  You can also check out hotels within a 60 minute drive from where you plan on viewing the eclipse.”

Experts are predicting that Nebraska will receive between 116,000 and 466,000 visitors to the state to witness this rare, once-in-a-lifetime occurrence.  With special guests and prominent scientists coming from all over the country to experience the eclipse, Nebraska is the best place to be.

The National Weather Service offices in Nebraska will be represented in the SEOC on the day of the eclipse.  The offices will also be providing spot weather forecasts for the path of the eclipse.  For more information on the weather in the area where you plan to view the eclipse, visit: www.weather.gov.

The American Red Cross works with the State of Nebraska on response to events in the state and will be represented in the SEOC.  Red Cross volunteers will be contacted through the SEOC should a need for assistance arise. 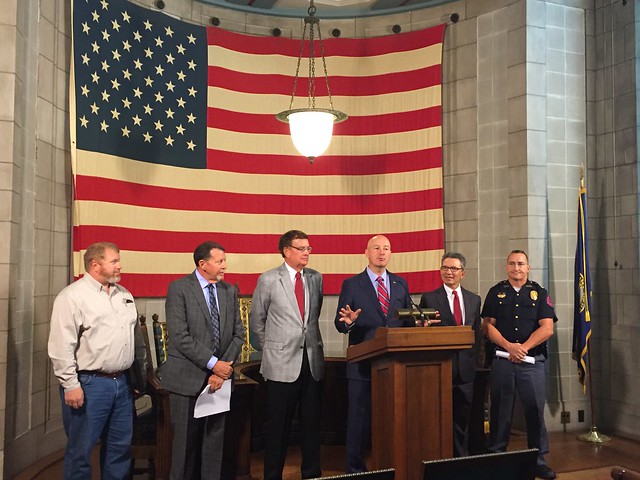