The first bill, LB339 introduced by Senator Curt Friesen of Henderson, creates the Nebraska Department of Transportation (DOT) by merging the Department of Roads and Department of Aeronautics.  This legislation was one of the Governor’s top priorities for the 2017 legislative session, and was passed with overwhelming support from the Legislature.

“This legislation will create efficiencies, which will allow us to put more money into runways and roads without sacrificing jobs,” said Governor Ricketts.  “Thanks to Aeronautics Director Ronnie Mitchell and Roads Director Kyle Schneweis for all their work on this merger.  Also, thanks to Senator Curt Friesen for sponsoring and championing this bill in the Legislature.”

The Department of Aeronautics will join the Department of Roads under the new DOT umbrella with Aeronautics becoming a division of the current Roads structure.  Schneweis will lead the Nebraska Department of Transportation with Mitchell overseeing the aeronautics division.  Neither Department has identified positions to be eliminated but do anticipate two positions will be transferred from Aeronautics to Roads with more savings expected.

“Merging these two agencies into one DOT shows that all forms of transportation are important for economic development across this state,” said Senator Friesen.  “In rural and urban areas, we depend on good safe roads and strong competitive air service for growing our economy.”

LB271 was introduced by Senator Mike Hilgers of Lincoln and prioritized by Senator Suzanne Geist of Lincoln.  The bill authorizes the new DOT to enter into a memorandum of understanding with the United States Department of Transportation, allowing the state to assume responsibilities under the National Environmental Policy Act of 1969.  This arrangement has helped accelerate roads projects in other states.

“Thank you to Senators Hilgers and Geist for working with their colleagues to bring LB271 to my desk,”  said Governor Ricketts.  “With this measure in place, our new Department of Transportation will have another tool to help accelerate infrastructure construction in Nebraska.”

"This bill is a win-win for Nebraskans—it will help get our highway projects done faster while saving millions of taxpayer dollars,” said Senator Hilgers.

“Housing is one of the top concerns I hear about from Nebraskans as I travel the state,” said Governor Ricketts.  “This legislation creates an effective tool to assist communities with the development of workforce housing and Grow Nebraska.  Thank you to Senator Williams for his work on LB518.”

Grants will be available to nonprofit development organizations in eligible communities.  The maximum amount awarded may not exceed $1 million to any one organization over a two-year period and no more than $2 million through fiscal year 2020-21.  Eligible applicants must provide one-to-one matching funds to be considered for a grant.

“LB518 addresses what has been identified as one of the primary barriers to economic development in rural areas–the lack of workforce housing,” said Senator Williams.  “I'm optimistic that LB518 will create additional opportunities for economic growth and improve the quality of life in Nebraska.”

Priority will be given to communities that have demonstrated an ongoing need for housing through a housing study, a low unemployment rate, difficulty filling vacancies, a demonstrated commitment to growing their housing markets and potential projects that could be ready for occupancy within two years. 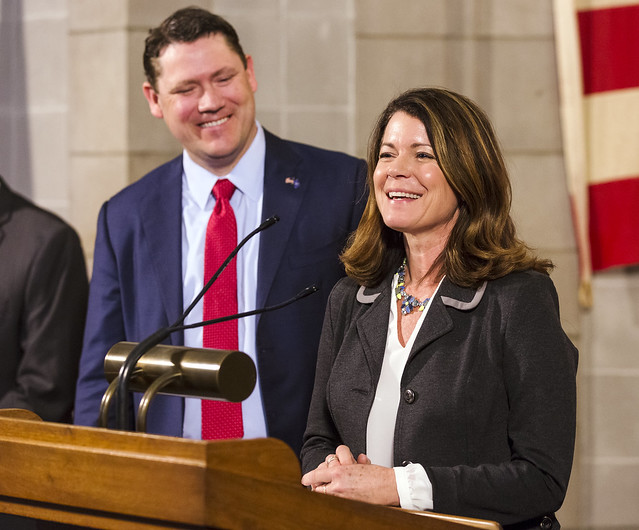