“The Tax Cuts and Jobs Act has been a big win for families and businesses across Nebraska.  Over the past several months, we have seen businesses reinvesting their tax savings in their workforce,” said Governor Ricketts.  “These bills make important adjustments to our state tax code so that Nebraska’s families, farmers, ranchers, and businesses enjoy the full benefits of federal tax relief.  Thank you to Senator Smith and all the Senators who voted for these bills for protecting Nebraskans from an over $200 million income tax hike.”

“Nebraska’s federal delegation helped deliver major tax relief for our state with the Tax Cuts and Jobs Act,” said Revenue Committee Chair Jim Smith of Papillion.  “LB 1089 and LB 1090 will help ensure that Nebraskans experience the tax relief they deserve.  Thank you to my colleagues in the Legislature, Governor Ricketts, and the numerous other partners on these bills for their work over the past several months.”

LB 1090 was introduced by Senator Smith and passed with a vote of 44-0-4.  Among numerous provisions included in the bill, LB 1090 restores the personal exemption credit that was eliminated in the Tax Cuts and Jobs Act (TCJA).  It also establishes the Nebraska standard deduction at $6,750 for single taxpayers, $13,500 for married, filing jointly taxpayers, and $9,900 for head of household filers.  Additionally under the TCJA, the federal method of indexing for inflation was changed from the traditional Consumer Price Index (CPI) measure to Chained CPI.  LB 1090 will adjust the individual income tax brackets, the personal exemption credit, and the standard deduction based upon the traditional CPI method.

LB 1089 was also introduced by Senator Smith and passed with a vote of 48-0-1.  Among other things, LB 1089 changes provisions relating to purchases of depreciable personal property using a trade-in for personal property tax purposes.  LB 1089 helps prevent valuation increases on personal property that is taxed at the local level.

Governor Ricketts also signed LB 738, which indexes state income tax rates for Social Security income for inflation using the traditional CPI method.  The bill was introduced by State Senator Brett Lindstrom of Omaha, and was passed by the Unicameral Legislature by a vote of 44-2-2.

“Indexing our social security income tax rates for inflation will help make Nebraska a better place for our seniors,” said Governor Ricketts.  “Thank you to Senator Lindstrom for his leadership in bringing this bill, which will help deliver ongoing relief for many Nebraskans on fixed incomes.”

“Nebraska is one of only a handful of states that taxes social security income,” said Senator Lindstrom.  “This bill helps move Nebraska more into the mainstream of states nationally, and helps Nebraska become a more attractive place for retirees.  Thank you to the Revenue Committee, my fellow Senators, and Governor Ricketts for getting this passed and enacted into law.” 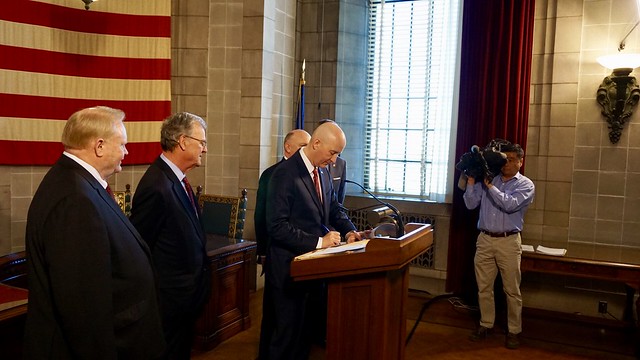