“Across Nebraska, pro-life values permeate our culture,” said Governor Ricketts.  “With this bill, Nebraska joins numerous other states who offer ‘Choose Life’ license plates.  While this is a small step, it is an important one for pro-life Nebraskans.  Thank you to Senator Watermeier, Senator Friesen, and each senator who voted for this legislation.  The broad-based support reaffirmed that being pro-life is non-partisan in Nebraska.”

Senator Watermeier successfully shepherded the legislation and worked with senators to overcome a filibuster mounted by Senator Ernie Chambers of Omaha.

“I was pleased that the Legislature passed LB46, thereby allowing Nebraska to join the twenty-nine other states that offer ‘Choose Life’ license plates,” said Senator Watermeier.  “I think this is an appropriate way for motorists to express their support for pregnant women and the unborn through the purchase of these plates.  Furthermore, low-income families with minor children will benefit from the additional revenue generated by the plates.”

Pro-life organizations representing thousands of Nebraskans supported the bill throughout the legislative process.

“The Nebraska Catholic Conference (NCC) represents the mutual public policy interests of the three Catholic Bishops serving in Nebraska,” said Nebraska Catholic Conference Pro-Life Director Jeff Kanger.  “The NCC is proud to fully support and see LB46, the first pro-life legislation to be passed since 2011, become law.  The availability of Choose Life license plates will help to foster the strong, historical culture of protecting life in the state of Nebraska.”

“This is a historic moment and a big win for pro-life Nebraskans,” said Nebraska Family Alliance Executive Director Karen Bowling.  “As the first pro-life bill in five years, this is an important step in advancing the culture of life in our state.  We are grateful for the work of Senator Watermeier, Governor Ricketts, and Lt. Governor Foley who have consistently been pro-life champions.” 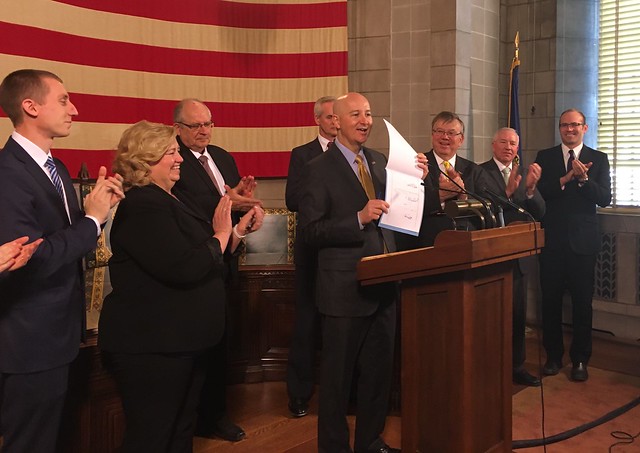