TOKYO, JAPAN – Today, Governor Pete Ricketts participated in a signing ceremony at Sagami Restaurant in Tokyo, Japan on behalf of Nebraska’s pork producers.  During the ceremony, representatives from Smithfield Foods International Group and Sagami Chain Co. Ltd. signed a Letter of Intent (LOI) designed to expand the business relationship between the two parties.  This expansion will result in the sourcing of pork products by Sagami from Smithfield’s processing plant in Crete, Nebraska.

“Japan is Nebraska’s largest export market for pork products,” said Governor Ricketts. “Having a high-end restaurant chain such as Sagami and a well-respected pork processor such as Smithfield recommit to their business relationship is a positive sign for Nebraska’s pork producers.  We will continue our efforts to increase the sales of our value-added products to bring more opportunities for our farm and ranch families who help grow our state’s number one industry.”

The Sagami Chain has more than 170 restaurants located across Japan.  They specialize in deep-fried pork cutlets.  A year ago, Sagami CEO Toshiyuki Kamada visited Nebraska to tour the Smithfield facility in Crete.

“Last year’s visit from Mr. Kamada was important because it gave him the opportunity to see first-hand that Nebraska can produce high-quality pork that his restaurants require,” said Nebraska Department of Agriculture Assistant Director Mat Habrock.  “Nebraska’s pig industry is expanding rapidly.  Getting the stamp of approval from restaurant chains such as Sagami will go a long way in assisting us in increasing pork exports.”

Habrock is part of the Nebraska delegation in Japan led by Governor Ricketts.  Earlier in the week, the Governor attended the Midwest U.S. Japan Association annual meeting.  The group has since been traveling to various locations in the country to expand business and investment opportunities for Nebraska.

“Nebraska pork is a perfect fit for customers in Japan not only because of the quality aspects of the pork but our production standards from animal and land stewardship meet the expectations of the Japanese consumer.  It is refreshing to see Sagami to take a pragmatic approach to trade, and do what is best for their customers,” said Trent Loos, Nebraska delegation representative for the National Pork Producers. 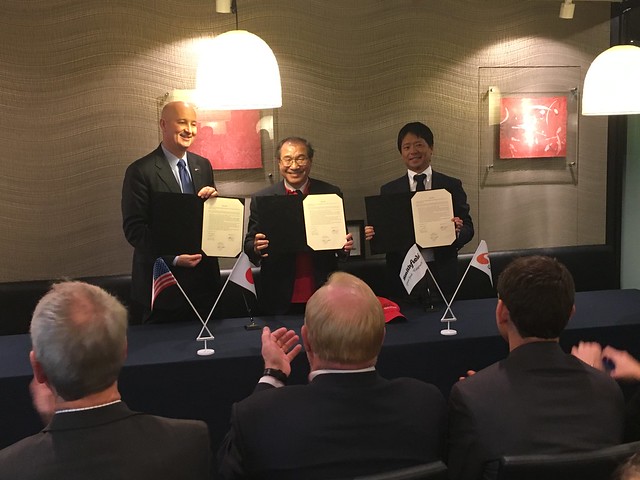