LINCOLN – Today, Governor Pete Ricketts signed LB340e to merge the Nebraska Department of Veterans’ Affairs (NDVA) and the Division of Veterans’ Homes (DVH) from the Department of Health and Human Services (DHHS).  The Governor launched this initiative with Senator John Murante of Gretna as a way to provider a higher level of service to Nebraska’s veterans by creating a one-stop shop to for all veterans served by the State of Nebraska.  This legislation was one of the Governor’s top priorities for the 2017 legislative session, and was passed with unanimous support from the Legislature.

“Thank you to Senators Murante, Brewer, and Briese for working to make this merger a reality,” said Governor Ricketts.  “This merger of our veterans’ agencies will make state services to our veterans more effective, more efficient, and more customer-focused.  No longer will our veterans have to work with two agencies to receive services.  This one-stop shop for services for Nebraska’s veterans creates a single, united team working for the men and women who have sacrificed so much for our state and country.”

Nebraska is home to over 143,000 veterans, many of whom are served by two state agencies.  DVH operates four facilities from Bellevue in the east to Scottsbluff in the West.  NDVA has operations in Lincoln and Alliance as well as collaborating with veterans service officers across the state.  A single agency will:

“Thanks to the leadership of Governor Ricketts, we are realizing a vision that has been discussed for at least the last 20 years,” said NDVA Director John Hilgert.  “LB340e cuts unnecessary red tape for our veterans and their families.  Our team is ready and excited to implement this merger, which will help provide a higher level of service to veterans across Nebraska.”

At the signing ceremony, Governor and Director Hilgert were joined by State Senators and leaders representing numerous Veterans Service Organizations.  Veterans Organizations who have worked towards making this merger a reality over the years include:

“The transfer of the Division of Veterans Homes to the Department of Veterans Affairs will provide better, more efficient care to our veterans at a lower cost to taxpayers,” said Government Committee Chair John Murante.  “As the Chairman of the Government, Military, and Veterans Affairs Committee, LB340e represents a continuation of our committee’s commitment to make Nebraska a better place for our veterans to live, work, and raise a family.  I would like to thank the Governor for his efforts on this bill, Senator Brewer for prioritizing it, and all of my fellow senators for voting to make LB340e law.”

No facilities will close as a result of the merger.  All Veterans Homes Employees will be transferred to NDVA and will not need to reapply for their jobs.

At the signing ceremony, Governor Pete Ricketts also signed LB88e, a bill introduced by Senator Carol Blood of Bellevue to break down barriers for military spouses with occupational licenses.  The bill authorizes DHHS, with the recommendation of the appropriate board, to issue temporary licenses for occupations regulated under the Uniform Credentialing Act to military spouses.  The bill also contains two provisions from other bills introduced at the request of the Governor:

The third and final bill signed by Governor Ricketts is LB639 introduced by Senator Bruce Bostelman of Brainard.  LB639 opens up more job opportunities for military families with two provisions.  First, the spouse of an active duty service member can receive employment preference whenever the military member is serving in active duty with the military and up to six months after the service member is discharged or separates from the military.  Second, hiring preference is expanded to include a return to employment with any public governmental entity.  The current preference only exists at the time of initial hiring.

Nebraska already provides for hiring preference for qualified veterans for employment with the State of Nebraska. 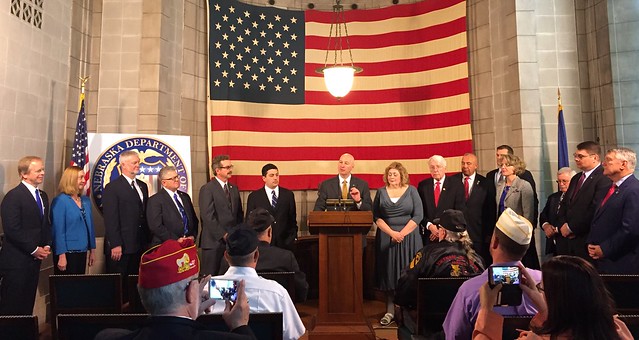