“Occupational licensing reform helps make state government more effective, efficient, and customer focused,” said Governor Ricketts.  “Working with my agencies, we were able to identify areas where Nebraska’s licensing requirements were onerous or out-of-step with other states.  Unnecessary licensing restrictions are a barrier to Nebraskans seeking careers in licensed professions, and especially to those who may be looking for a career change or upward mobility.  Removing restrictions will grow job opportunities for Nebraska.”

Nearly 25 percent of Nebraska’s workforce hold one of about 200 occupational licenses.  The reforms being introduced in the Nebraska Legislature this year would change licensure requirements for 20 occupations, including:

Reforms to these occupational licenses and others will cut red tape and eliminate burdensome regulations that have placed unnecessary hurdles.  Senators Albrecht, Craighead, Erdman, Geist, Larson, Lindstrom, Lowe, and Riepe will introduce legislation to make the reforms possible.

“One of my first jobs was working on a car lot as a salesman and I was forced to pay for the permit that I now am working to repeal.  These permits are time consuming, take hard-earned dollars out of individuals pockets and are completely unnecessary,” said Senator John Lowe of Kearney.

Types of occupational license reforms in the legislative package include among others:

At the announcement, the Platte Institute’s Nicole Fox, who successfully led an effort to reform the state’s requirements for hair braiding last year, and other occupational license reform advocates stressed how onerous licensure requirements can become a barrier to Nebraskans looking to enter a profession.

“Occupational licensing reform will make Nebraska’s job licensing requirements more consistent and competitive with our neighboring states, so that we keep individuals from leaving our state in search of work elsewhere,” said Fox.  “Occupational licensing reform will also provide greater reciprocity for workers wanting to move to Nebraska who already hold licenses in good standing in other states.  Reform will help cultivate an environment where new businesses are being created and hardworking Nebraskans can find the jobs they need to stay in the Good Life.” 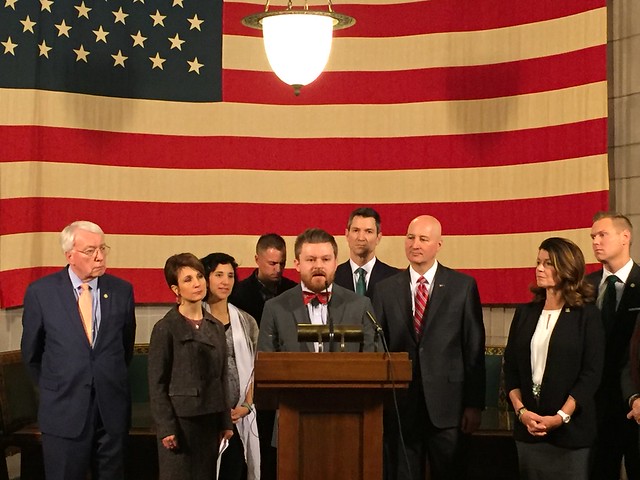