“Merging our veterans’ agencies will make state services to our veterans more effective, more efficient, and more customer focused,” said Governor Ricketts.  “A single agency will create a one-stop shop for services for Nebraska’s veterans and will forge a single, united team working for the men and women who have sacrificed so much for our state and country.”

Nebraska is home to over 143,000 veterans, many of whom are served by two state agencies.  DVH operates four facilities from Bellevue in the east to Scottsbluff in the West.  NDVA has operations in Lincoln and Alliance as well as collaborating with veterans service officers across the state.  A single agency will:

“This is a great day for veterans across Nebraska,” said Government, Military, and Veterans’ Affairs Committee Chairman Murante.  “Nationally, the VA is well-known for its bureaucracy.  Here in Nebraska, the state already provides a high-level of service to our veterans, and this is a tangible way we can further eliminate unnecessary bureaucracy.”

“The concept of a merger has been discussed for decades, but we are a step closer to reality thanks to the leadership of Governor Ricketts and Chairman Murante,” said Director Hilgert.  “Under this administration, we have put an even greater focus on better serving customers.  With this merger, we are excited by the potential to provide streamlined services with a united team and one-stop shop for Nebraska’s veterans and their families.”

At the announcement, representatives from numerous veterans organizations endorsed the proposal including the American Legion, Veterans of Foreign Wars (VFW), and Disabled American Veterans among others.

“Thank you to Governor Ricketts for this opportunity to express our support for such an important initiative,” said VFW State Commander Doug Whitaker.  “As veterans, we are fortunate to live in a state that is committed to continuously improving the delivery of veteran services, especially at a time when state revenues are projected to be lower.  The Nebraska Department of Veterans Affairs has an exceptional track record of taking care of Nebraska veterans and the merger will build on their past success.  The VFW and our members urge the Unicameral to support this initiative.”

Chairman Murante plans to formally introduce legislation to facilitate the merger following Governor Ricketts’ State of the State address at 10:00am on Thursday, January 12, 2017. 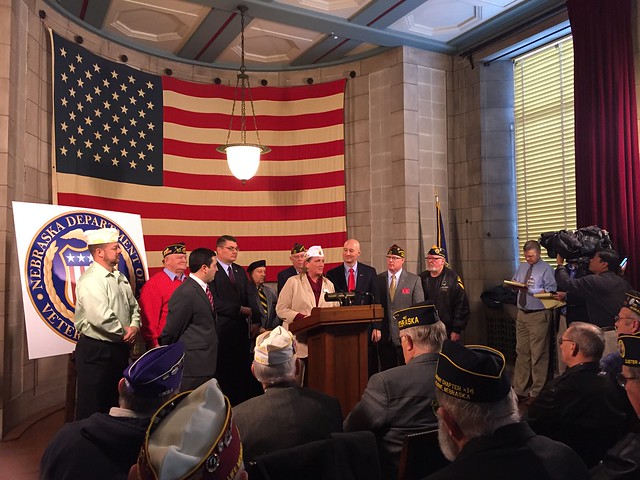