“In my travels across the state in conversations about property taxes, Nebraska ag producers have suggested moving to an income-potential based system,” said Governor Ricketts.  “This system is much fairer, more predictable, and more standard across similar ag states.  By helping taxes track more closely with income, we can protect agriculture and help Nebraska’s farms and ranches continue to thrive and grow.”

Under LB338, the method for assessing property value would change from a market-based system to an income-potential approach, helping taxes to better reflect the income of Nebraska’s ag producers.  Income potential is a much fairer measure, and will slow the growth of ag land valuation increases.  If this system were in place for 2017, it would reduce ag land valuations by about $2.2 billion.  After the bill passes, the state would transition to the new system beginning in 2019 to give local taxing entities and county assessors plenty of time to prepare.

“For Nebraska, ag property tax reform is one of the keys to growing our state,” said Ag Committee Chair Brasch.  “High property taxes are crushing not only ag producers, but they are also indirectly impacting Main Street in rural Nebraska right now.  The Tax Foundation ranks Nebraska 39th in the nation because of our high property taxes, and ag has been bearing more and more of the brunt of our state’s high property taxes recently.  LB338 would help control growth in valuations and make Nebraska much more competitive with surrounding states.”

At the news conference, Governor Ricketts and Ag Committee Chairwoman Brasch announced that the following organizations supported the concept behind LB338:

At the State Capitol in Lincoln, ag producers from Bloomfield, Elk Creek, Loup City, Shelton, Whitman, and other communities across the state voiced support for LB338 and highlighted the impact this new ag land valuation method have on Nebraska’s farm and ranch families.

“As a former Elk Creek School Board member, I know how much Nebraskans take pride in their local government which relies on property taxes,” said former Lt. Governor and ag producer Lavon Heidemenn.  “While property taxes are managed locally, state government sets the rules of the game for property tax assessments.  LB338 is a common sense step Nebraska needs to take for the long-term.  By tying taxation more closely to income potential, we can help ensure that our kids and grandkids find the same opportunities we have had in agriculture.”

“Right now, under the real estate market-based valuation system, valuations are driven by market forces that are not directly tied to the land’s income potential,” said Cherry County Commissioner and rancher Tanya Storer.  “In recent years, this system has resulted in severe spikes in land valuations, which some local governments have taken advantage of.  Moving to the income-based approach with a valuation increase cap would help create greater predictability and help slow the rise of valuations not only for ag producers but also encourage local government to more responsibly manage their budgets.”

“Tying ag property values to commodity prices and yields, would help Nebraska become more competitive with other ag states,” said Shane Greckel, a farmer from Bloomfield.   “This is a system that is already utilized in North Dakota, South Dakota, Kansas, Iowa, Wisconsin, Illinois, Indiana, and Ohio.  Senators need to get LB338 passed and on the Governor’s desk this year.  Failure to enact long-term reform could have a crippling effect on agriculture in the long run.  If you are an ag producer and you want to see tax reform pass this year, you need to step up and take action right now.” 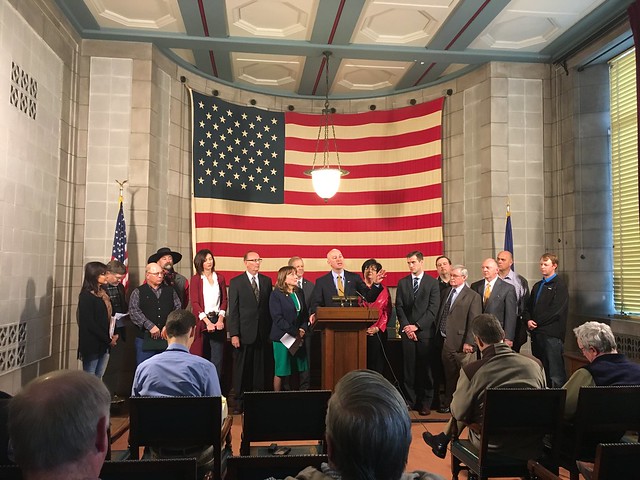