OMAHA – Today, Governor Pete Ricketts, along with Captain Micheal McGee from the Omaha Police Department (OPD) and a representative from Omaha Mayor Jean Stothert’s Office, presented the Carnegie Medal to four Nebraskans: Robert Goering-Jenson, Brett Bailes, Chris Holbeck and Dennis Wilson for their acts of outstanding civilian heroism.  The Carnegie Medal is awarded by the Carnegie Hero Fund Commission to those who risk their lives to an extraordinary degree while saving or attempting to save the lives of others.

“I would like to thank Robert, Brett, Chris and Dennis on behalf of all Nebraskans for their selfless actions,” said Governor Ricketts. “Their efforts were truly heroic, and we all feel safer in the knowledge that people like them fill all of Nebraska’s communities.”

Omaha Police Chief Todd Schmaderer said that he would like to "congratulate all the recipients of the Carnegie Hero Medal for going above and beyond and putting their own lives in danger to save a person in need."

"The actions of these four men exemplify the Omaha spirit we are so proud of, reminding us that Omaha is a community of caring and compassion," said Omaha Mayor Jean Stothert. "We are grateful for your courage and the results of your quick actions."

Goering-Jensen, a police officer of Ashland, Neb., was on duty nearby when he saw dense smoke and flames issuing from the eaves of the house.  He responded to the scene and learned that the house was occupied.

Entering the living room through the front door, Goering-Jensen used his flashlight to see Gregory’s wheelchair across the room.  Goering-Jensen crawled through dense smoke to the chair, grasped it by a footrest, and pulled it, with Gregory, back to the door, where other responding officers took Gregory to safety.

Having heard cries for help from inside the house, Goering-Jensen learned that Lula was in her bedroom.  He re-entered the burning structure and, again crawling across the living room through dense smoke, followed Lula’s cries to her room.  Entering the room, he stood, lifted Lula from her bed, and retraced his path back to the front door and outside to safety.

Gregory and Lula were treated at the scene, but Goering-Jensen was taken by ambulance to the hospital for treatment of smoke inhalation.  He recovered.

Brett Bailes, Chris Holbeck, and Dennis Wilson saved Nathaniel A. Wissink from a burning car in Omaha on February 26, 2016.

Wissink was unconscious and trapped in the front passenger seat of a car after it was struck on its driver’s side by a pickup truck traveling at high speed through a residential neighborhood.  The car, which burst into flame, was demolished, with its back end split almost apart from the front, its fuel tank ruptured, and most windows broken out.  Flames issued from the rear of the vehicle, including the backseat area, and were spreading toward the front seats, producing dense smoke.

Bailes was at his home nearby and immediately ran to the scene, where he saw a backseat passenger, aflame, step from the wreckage.  He extinguished the flames on her.

Meanwhile, Holbeck, who also lived nearby, also immediately ran to the scene to find the car’s driver emerging through the window of the driver’s door.  Holbeck aided him from the vehicle and took him to safety.

Likewise, Wilson immediately ran to the scene and with the two other men learned that Wissink was still in the vehicle.  After going to the car’s front passenger door, which he could not open, Bailes joined Holbeck and Wilson at the driver’s door, where Holbeck had bent down the window frame.

In repeated attempts, the men reached through the opening, locating Wissink but finding that he was trapped by the wreckage.  They pulled on him until he was freed, Wilson standing adjacent to flames at the rear of the vehicle.  The men pulled Wissink head-first through the opening and dragged him to safety, shortly thereafter flames engulfed the car’s interior.

Wissink required hospitalization for treatment of his injuries. 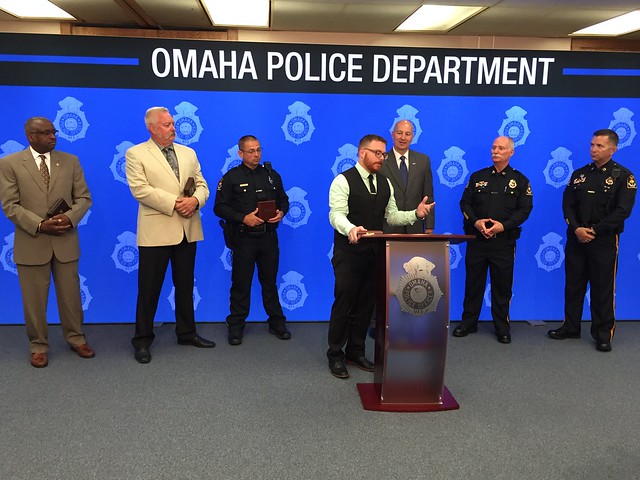