BLAIR – Today, less than five years after Novozymes opened a state-of-the-art advanced manufacturing facility in Blair, Governor Pete Ricketts announced that the company has selected the site for its most recent expansion efforts in North America.  The company’s new $36 million investment in the facility, which produces enzymes for renewable fuels, will increase the plant’s capacity to meet growing needs within the bioscience industry and global biofuels market.  Novozymes’ expansion efforts support the company’s long-term commitment to the production of enzymes for the biofuels industry, a segment within the larger bioscience industry.

“Nebraska’s biofuels industry has been a focus for my administration on trade missions because of the international investment we’ve seen here in Nebraska,” said Governor Pete Ricketts.  “Meeting face-to-face with Novozymes’ CEO, Peder Holk Nielsen, not only allowed us to thank him for doing business in our state, but also allowed us to make the case for additional investment in Nebraska.  Novozymes’ recent investment in Blair is an example of the importance of trade missions and how this evolving industry is helping grow Nebraska.”

In 2015, Governor Ricketts visited Novozymes’ headquarters in Copenhagen, Denmark to meet with senior executives, strengthen Nebraska’s relations with the company, and encourage further investment in the state.  While there, the Governor and his delegation had a unique opportunity to tour the facility that oversees the company’s production of enzymes used in the agriculture, animal nutrition, and biofuels industries.  The Governor pitched Nebraska’s unique characteristics as an ideal location for the company’s continued investment.

Since 2012, production capacity in Nebraska’s biofuels industry increased by 7.8 percent.  Nebraska is the number two ethanol producer in the nation and produces more than 2 billion gallons annually, second only to Iowa.  Nebraska, Iowa and Illinois produce nearly half of the 15.2 billion gallons of ethanol generated each year in the United States.

“With stable, clear policies like the Renewable Fuels Standard (RFS) that encourage competition at the gas pump, we will continue to grow the market for American ethanol,” said Novozymes Americas President Adam Monroe.  “This means expanding facilities like ours here in Blair, adding jobs, and generating more revenue for American towns and workers by increasing domestic production of liquid transportation fuels.”

The company has hired more than 100 local contractors to install additional production equipment and water cooling units at the facility, where work is currently underway.  Company officials worked with both state and local economic development partners to expand in Blair, including the Nebraska Department of Economic Development (DED), Omaha Public Power District (OPPD) and Gateway Development Corporation.

“Novozymes’ investment in Nebraska continues to create wonderful opportunities for our state’s talented workforce,” said DED Director Courtney Dentlinger.  “Over the past five years, the company has hired more than 100 full-time employees in Blair and has consistently relied on local contractors to build and expand this facility.  Nebraskans’ strong work ethic and skilled labor capabilities have positioned our state as an ideal location to grow an international business.”

“Novozymes is one of Blair’s most impactful corporate citizens.  Its multi-million-dollar expansion represents another remarkable economic win for the Blair community, Washington County, and the state of Nebraska, solidifying our reputation as a major player in the bio-industry on a global level,” said Lisa Scheve, Executive Director of Gateway Development Corporation, a member of the Greater Omaha Chamber Economic Development Partnership.

The company employs 6,200 team members worldwide, including 115 at the Blair facility.  Community leaders continue to capitalize on efforts to recruit skilled labor at Novozymes.

“The community of Blair appreciates Novozymes’ presence in our city, as well as efforts by corporate leaders to provide new opportunities for our diverse workforce,” said Blair Mayor Jim Realph.  “By expanding capabilities within the plant, this company is providing great incentives for skilled workers to stay in Nebraska.”

While the company’s North American presence includes its headquarters in Franklinton, NC, and 10 additional facilities in the United States and Canada, Novozymes’ Blair plant currently serves as its only American facility dedicated to the growing biofuel industry.

Novozymes is a prime example of the Trump administration’s recent Executive Order on Agriculture and Rural Prosperity in America.  The company supports the vision stated in the Executive Order, that, “It is in the national interest to promote American agriculture and protect rural communities where food, fiber, forestry and many of our renewable fuels are cultivated.” 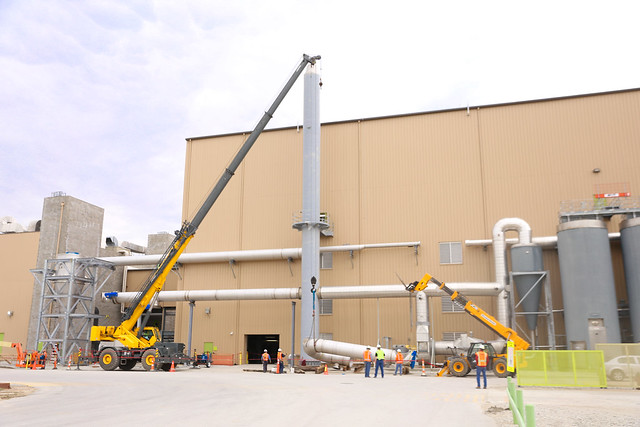 Novozymes is the world leader in biological solutions.  Together with customers, partners, and the global community, the company improves industrial performance while preserving the planet’s resources and helping build better lives.  As the world’s largest provider of enzyme and microbial technologies, its bioinnovation enables higher agricultural yields, low-temperature washing, energy-efficient production, renewable fuel, and many other benefits that we rely on today and in the future.  In 2016, Novozymes’ Blair plant earned Nebraska’s “Manufacturer of the Year” award from the Nebraska Chamber of Commerce and Industry and the “Safest Company with Distinction” award from the National Safety Council.