LINCOLN – Today, Governor Pete Ricketts and advocates for tax relief rallied in the State Capitol rotunda for LB461, the 2017 Nebraska Taxpayer Reform Act.  At the news conference, numerous senators and organizations announced their support for the bill, which provides comprehensive tax reform for working families, ag producers, and businesses of all sizes.

“Tax reform is a key component to Grow Nebraska,” said Governor Ricketts.  “Among senators who subscribe to the philosophy of lower taxes for families and to grow the economy, they have come together across the state, rural and urban, to deliver tax relief to Nebraskans.  I want to thank everyone here today for working on developing a package that can bring us together to do what is right for Nebraskans.  I especially want to thank Senators Jim Smith, Lydia Brasch, and Steve Erdman for their dogged determination on this front.  Their tireless work is making tax reform possible this year.”

Additionally, several groups announced their support of LB461 at the news conference.  These groups include:

“The Governor and Senator Smith have gone above and beyond the call of duty to craft a comprehensive plan that would provide tax relief to all Nebraska taxpayers,” said Nebraska Chamber of Commerce and Industry President Barry Kennedy.  “They are to be commended for not shifting tax burden from one group of Nebraskans to another.  The State Chamber supports LB461 as a meaningful step to long-term tax relief.”

“Americans for Prosperity – Nebraska strongly supports the 2017 Nebraska Taxpayer Reform Act,” said Americans for Prosperity State Director Matt Litt.  “This legislation offers reasonable and responsible tax reform and relief for our fellow Nebraskans.  We are long overdue for positive changes to the tax code that make structural reforms to property taxes and reforms that allow Nebraskans to keep more of their hard-earned money to invest how they see fit.  We encourage all of the state senators to support 2017 Nebraska Taxpayer Reform Act- to support reasonable and responsible tax reform and relief for Nebraskans.”

“The 2017 Nebraska Taxpayer Reform Act puts ag land tax reform first,” said Steve Wellmen of Syracuse on behalf of the Governor’s Agriculture Advisory Committee.  “Moving ag land valuations from market assessment to income potential is something ag producers have sought for years.  The tax relief plan also builds the urban-rural coalition needed to move tax relief through the Unicameral.  Nebraska’s farm and ranch families need immediate relief, and I urge the Legislature to act on LB461 and to pass it this year.

Additional information about the 2017 Nebraska Taxpayer Reform Act can be found by visiting https://governor.nebraska.gov/taxrelief or by clicking here. 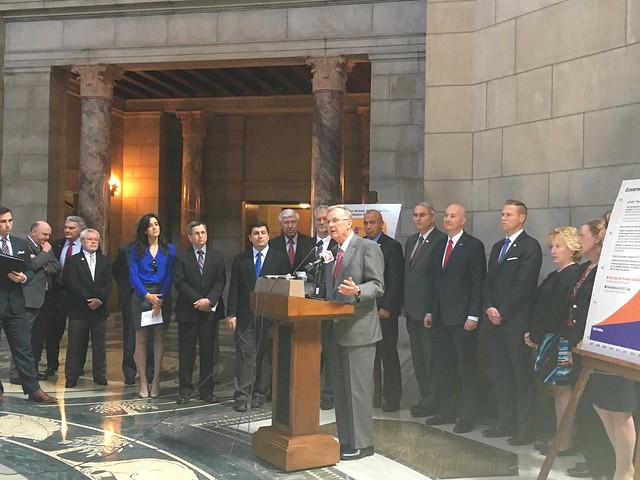