Projected to open in April 2019, the $300-million project is expected to generate an overall economic impact of $1.2 billion annually, create approximately 800 new jobs, and connect Costco to a dedicated network of producers in eastern Nebraska.

“This is a monumental day for Costco, Fremont, and the State of Nebraska,” said Governor Pete Ricketts.  “Costco has a reputation for being a great corporate citizen, and today’s groundbreaking highlights what’s to come: good paying jobs, more opportunity for our local farmers, and the all-important expansion of value-added agriculture in our state.”

The Lincoln Premium Poultry facility, will utilize the latest technology to process an expected 2 million chickens a week for sale in Costco stores.

“We’re thrilled Costco chose to partner with our community and region to expand its business model and launch this new endeavor here,” said Cecilia Harry, Executive Director of the Greater Fremont Development Council.  “We celebrate the new jobs and investment and the impact this will have on our agricultural industries – whether its helping area farmers diversify their businesses, encouraging the next generation of farmers, or growing firms that will support facility operations.”

“We are eager to continue our work with the community, officials at all levels, our trusted construction partners, and with everyone else involved in order to make this business something that Fremont, Nebraska and Costco can truly be proud to be part of,” said Jonathan Luz, Director of Strategic Planning and Development for Costco.

“This facility is going to be state-of-the-art, using the most advanced technology in the world, adding a broad array of jobs to the region’s workforce,” said Randy Thelen, Senior Vice President-Economic Development for the Greater Omaha Chamber.  “Our community is gaining a new economic engine whose positive impact will extend throughout the region.”

“This project will have a significant economic impact on the region and the state as a whole,” said Courtney Dentlinger, Director of Nebraska Department of Economic Development.  “In addition to the substantial capital investment, Costco will create 800 new jobs, including jobs in information technology, mechanics, and management.  The Department was pleased to partner with a number of organizations to help the company choose Nebraska after its highly competitive site selection process.”

Complementing the region’s existing industries, the farmer network needed for a facility of this scale brings an opportunity for farmers to diversify their portfolios and expand existing operations.

“This facility will create an opportunity for diversification for farmers in the Greater Fremont area.  The producers who choose to build poultry houses will have an opportunity to add another income source to their operation.  All row crop farmers will have a new market for corn and soybeans which will be utilized in the poultry rations,” said Nebraska Department of Agriculture Director Greg Ibach.  “Costco has also indicated a willingness to be a great partner for Nebraska as a whole, going above and beyond all environmental requirements and offering new and innovative contractual relationships that will be revolutionary for the poultry industry.”

“This is an exciting time to be in Fremont and eastern Nebraska,” said Fremont Mayor Scott Getzschman.  “We are already experiencing economic growth because of the project, and we are excited for that growth to continue as the Costco facilities are built and begin their operations.” 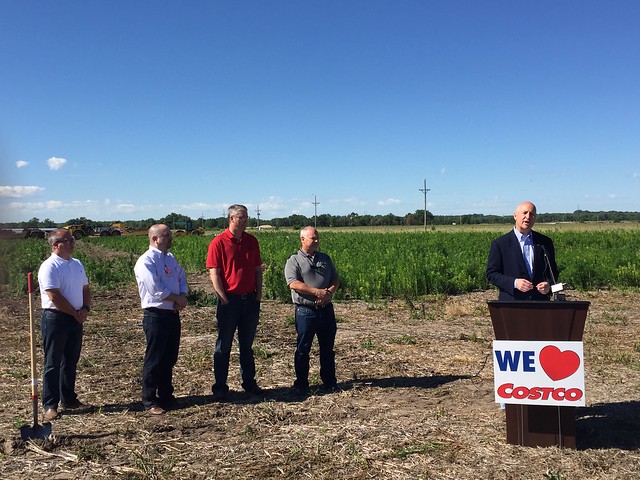