Analysis finds Nebraska has over 7.5 million words of regulations.

“During my first two and a half years in office, my administration has worked to grow Nebraska by making state government more effective, more efficient, and more customer focused,” said Governor Ricketts.  “To grow in a global economy, we must always be looking for new ways to improve Nebraska’s business climate.  This review will identify unnecessary red tape and eliminate harmful and wasteful regulations that are a hindrance to the job creators, ag producers, startups, and small businesses that are growing our state.”

The Governor was joined at a news conference by the Mercatus Center which recently conducted an analysis of Nebraska’s regulations and administrative code.  Mercatus’ analysis made the following findings:

“Nebraska is doing a good job at controlling regulatory burdens, especially relative to other states,” said James Broughel, Research Fellow for the State and Local Policy Project at the Mercatus Center at George Mason University.  “There is still room to do even better.  Nebraska still has a considerable amount of regulation on its books.  Given the very real impact that regulation has on living standards, and by extension the well-being of states’ residents, it’s not surprising that Governor Ricketts has decided that now is the time to bring regulatory reform to Nebraska.”

To assist with the review, Governor Ricketts named an advisory task force consisting of the following four members:

“Regulations come with a significant cost on businesses and consumers and they are often imposed with little or no input by the people they impact,” said Barry Kennedy, President of the Nebraska Chamber of Commerce and Industry.  “While some regulation is necessary, much of it affects the way Nebraskans live, work, and play and a review of these rules and regulations is a welcome development by the administration.  We commend Governor Ricketts’ effort to review and reduce any non-essential regulations to provide more certainty to our businesses so that they can realize their full potential for the betterment of our state’s economy.”

"The red tape that stifles Nebraskans' efforts to achieve their dreams is felt by all of us,” said Matt Litt, Nebraska Director for Americans for Prosperity.  “The regulatory state continues to grow and it must be pared back to be sure it is not frivolous and is limited to what is truly necessary for public health and safety.  We applaud Gov. Ricketts and others involved in this review and Americans for Prosperity-Nebraska stands ready to work with our network of grassroots activists and small business owners across the state to identify bureaucratic hurdles to job creation and economic growth."

"By conducting a thorough review of the state regulatory code in partnership with the Mercatus Center, the Platte Institute is pleased to lend its support to this new effort to identify the most harmful regulations on the books, and the existing or emerging industries that are being held back by unnecessary red tape,” said Jim Vokal, Chief Executive Officer of the Platte Institute for Economic Research.  “Hardworking Nebraskans are fortunate to have leaders in the executive and legislative branches, who are focused on making government work for the people.  We applaud Governor Ricketts’ work to eliminate unnecessary regulations that are barriers to business growth and better jobs in Nebraska." 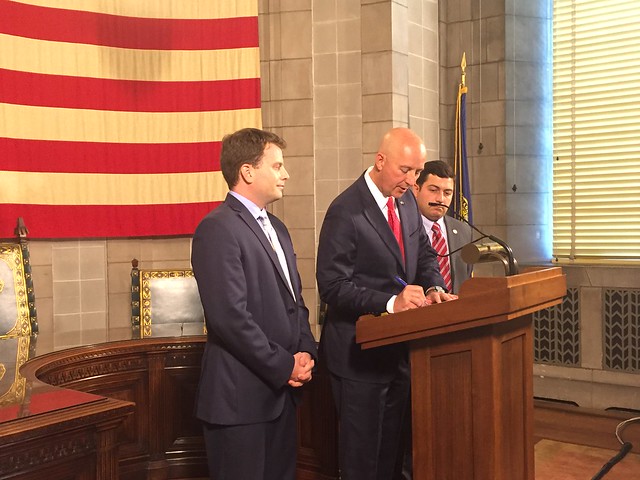