The Governor is bringing agriculture, business, and education interests together to increase international engagement.

LINCOLN – Today, Governor Pete Ricketts, the Nebraska Department of Agriculture (NDA), and Nebraska Department of Economic Development (DED) launched the Governor’s Council for International Relations at the 2nd Annual Governor’s Summit on Economic Development.  This new council is bringing together Nebraska business, agriculture, and education groups to work together to expand overseas trade opportunities and develop new international partnerships for the state.

“International trade and engagement is a crucial part of our state’s long-term growth.  Whether it takes the form of beef exports, inbound foreign direct investment, or student and cultural exchanges, Nebraska’s relations overseas bring great benefit to the entire state,” said Governor Ricketts.  “My administration is continuously pursuing new strategies for expanding international markets, attracting new investment, and building the state’s profile overseas, and we are committed to maintaining a competitive edge in a global economy.  The Nebraska Governor’s Council for International Relations will help us take the next step to grow trade for Nebraska by leveraging our combined resources to grow current investments in Nebraska and explore prospects for future partnerships.”

At the event, the Governor outlined three goals for the council:

“In 2015, Nebraska exported $6.4 billion dollars’ worth of agricultural goods accounting for over 25 percent of all agricultural cash receipts,” said NDA Director Greg Ibach.  “The Governor’s International Trade Council will create synergies between agriculture’s efforts to promote trade, the University’s international outreach, and the business community’s interest in foreign direct investment.”

“This Council will be a critical resource as we work to develop Nebraska’s strategic efforts to foster international relationships and increase trade,” said DED Director Courtney Dentlinger.  “This dynamic group of leaders will help position us to better compete for increased investment in industries such as advanced manufacturing, biofuels, and value added agriculture.”

This group will be comprised of top-level leaders from organizations heavily involved in Nebraska’s international efforts.  Participating groups and individuals include:

Additional individuals and groups have been invited to participate, and will be announced at a later date.

“Thank you to Governor Ricketts for stepping up and pulling together this new strategic initiative,” said Dr. Ronnie Green, University of Nebraska-Lincoln Chancellor.  “Global engagement has been helping Nebraska attract top-level talent and establish innovative partnerships for years.  This council presents an opportunity for Nebraska to come together and take a full-spectrum, long-term view of our international efforts as a state that are so critical to growing in a global world.”

“Trade is critical to the well-being of Nebraska agriculture and will continue to grow in its importance into the future,” said Steve Nelson, Nebraska Farm Bureau President.  “Today, Nebraska farm and ranch families rely on international trade for 30 percent of their overall income.  We are excited about the opportunity to work with Governor Ricketts and others to continue our efforts to move Nebraska agriculture commodities and Nebraska products into new markets.”

"Trade is highly important to Nebraska’s agricultural industry,” said Troy Stowater, Nebraska Cattlemen President.  “The beef industry has recently had tremendous success with international trade and we are extremely proud to see Nebraska high on the charts for exports.  We applaud the Governor for making trade such a high priority.”

“I want to thank Governor Ricketts on behalf of Nebraska agriculture for your continued focus on ag trade,” said Den Nerud, Nebraska Corn Growers Association Vice President.  “With 95 percent of the world’s population living outside of Nebraska’s borders and great growth potential outside of the U.S., developing a road map of strategies and partnerships to prioritize international opportunities for Nebraska’s farmers and ranchers is critical.”

“International trade is vitally important to companies from across the state,” said Barry Kennedy, President of Nebraska Chamber of Commerce and Industry.  “It’s important that we all work together to promote the state on the international stage.  We look forward to working with this administration, the universities, and the business community to further our common interests.” 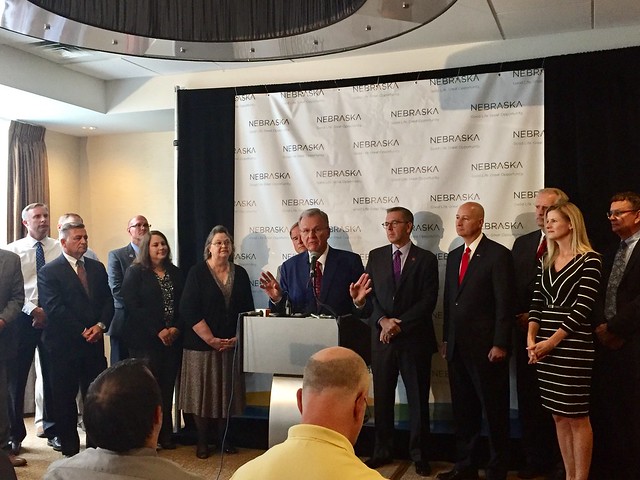