LINCOLN – Today, Governor Pete Ricketts and Kawasaki Motors Manufacturing Corp., U.S.A. hosted the grand opening of the company’s new Aerospace Division in Lincoln.  Production will initially focus on cargo door manufacturing for Boeing Corporation 777x aircraft.  The parent company, Kawasaki Heavy Industries in Japan, has been a proud partner of Boeing since 1973.  This is the first aerostructures production line for Kawasaki in the United States.

In September 2015, Nebraska Governor Pete Ricketts met with Kawasaki leadership in Japan during his first trade mission to Asia.  Kawasaki appreciates its relationship with the State of Nebraska.  Efforts by the state government, like Governor Ricketts’s visit to Kawasaki in Japan have helped strengthen that relationship and play a part in Kawasaki’s decision making when expanding its presence in Nebraska.

Kawasaki is honored to continue this strong partnership here in Lincoln at Kawasaki Motors Manufacturing Corp., U.S.A.  They look forward to being a strong and trusted partner on the 777x project and hope to continue to develop the relationship on future projects.

The state-of-the-art 777X is the newest member of Boeing’s bestselling 777 family, the market-leading twin-engine large passenger airplane.  Production at Boeing is set to begin in 2017, with the first delivery targeted for 2020.

Kawasaki is engaging in the development and manufacturing of forward and mid fuselage panels, main landing gear wells, pressure bulkheads, and cargo doors for the 777X.  For the production work of the cargo door at the Lincoln factory, Kawasaki will use an automated riveting machine and an in-house developed painting robot to enhance the automation and speed of production and ensure high quality, thereby increasing the efficiency in production.

The Lincoln factory began producing motorcycles in 1974, as a factory of Kawasaki Motors Corp., U.S.A. (and was later independently incorporated as KMM in 1981).  The factory currently produces, among others: all-terrain vehicles, the Jet Ski*1 personal watercraft, and railway vehicles.  The factory has introduced the Kawasaki Production Systems (KPS) *2, Kawasaki’s original production system developed through mass-production activities over many years.  It will extend these systems to the production of aerostructures as well.

The steady growth in demand for new aircraft is anticipated to continue in the worldwide commercial airplane market.  Taking this opportunity to establish an assembly line for the Boeing 777X’s cargo doors, Kawasaki designates the Lincoln factory as its aerostructure manufacturing base in the U.S. and will actively pursue the expansion of its commercial aircraft business as well as the growth of KMM. 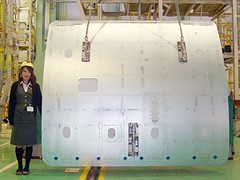 *1    Jet Ski is a registered trademark of Kawasaki Heavy Industries.

*2    The Kawasaki Production Systems (KPS)
Based on the Just In Time Systems, these systems use Kawasaki's proprietary logical production management techniques, which were developed and tested in-house by applying them on production lines, and which can be implemented in any production line, regardless of whether it is a mass-production or single-production line.

*3    Produced at the Maryville Plant in Missouri.