LINCOLN – Today, Governor Pete Ricketts welcomed representatives of the Boy Scouts of America from across Nebraska to the State Capitol to deliver their 2017 Report to the State of Nebraska on Scouting’s progress.  The Governor was joined by over 20 scouts representing the Overland Trails, Mid-America, and Cornhusker Councils of the Nebraska Boy Scouts.

“The Boy Scouts of America are one of our country’s most iconic organizations,” said Governor Ricketts.  “It is great to hear that the state of scouting in Nebraska is strong and growing.  The Boy Scouts help instill in our youth the characteristics evident in every great citizen: trustworthiness, loyalty, helpfulness, friendliness, and kindness among many others.  Thank you to the thousands of young Nebraskans and parents who give back to their communities through scouting activities every year.”

During the news conference, delegates from the various councils gave reports updating the Governor on the state of scouting in Nebraska.  The scouts also presented Governor Ricketts with a commemorative coin and the official certificate of the Report to the State.

The official certificate of the Report to the State can be found below. 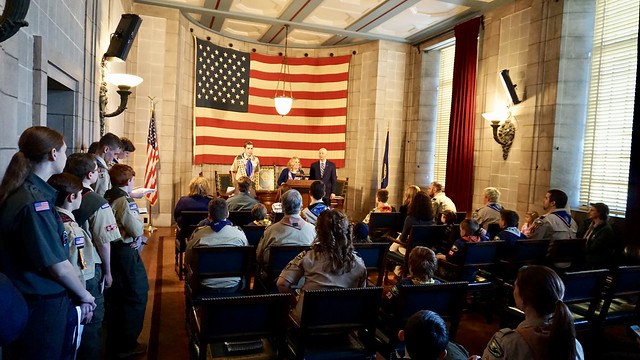