Governor Ricketts and Governor Ido with the signed memorandum of understanding, along with Consul-General of Japan in Chicago Naoki Ito.

LINCOLN – Today, Governor Pete Ricketts hosted a delegation from Japan’s Hyogo Prefecture led by Governor Toshizo Ido.  During a press event at the State Capitol, Governor Ricketts and Governor Ido signed a memorandum of understanding (MOU) strengthening the economic ties between Nebraska and Hyogo.  The University of Nebraska and University of Hyogo similarly signed an MOU on Wednesday that will lead to new educational and research collaborations between the two institutions.

“Nebraska and Hyogo share a tremendous friendship and a long history of economic collaboration,” said Governor Ricketts.  “Hyogo companies, such as Kawasaki, Yasufuku, S Foods, and American Shizuki Corporation, have been valued members of the Nebraska business community for decades.  They employ thousands of Nebraskans and contribute to the economic success of our communities.  Today, we strengthened our ties with Hyogo and look forward to pursuing new opportunities for economic and social exchange that will benefit both parties.  This is a great week for the state of Nebraska.”

“Nebraska and Hyogo’s signing of a Joint Statement on Mutual Cooperation makes this visit a cornerstone for strengthening the Hyogo-Nebraska partnership with a focus on economic cooperation,” Governor Ido said.  “In addition, I hope to see the exchange of people being promoted even more by the conclusion of an academic agreement between the University of Nebraska-Lincoln and the University of Hyogo.  I look forward to the deepening of the mutual understanding and growing exchange between Nebraska and Hyogo in wide-ranging fields, including the economy.”

During today’s press event, Governor Ricketts emphasized the importance of the close, longstanding economic relationships between Nebraska and Japan.  Japan is the world’s fourth-largest importer of Nebraska products and the largest export market for Nebraska beef, pork, and eggs.  It is also the third-largest export market for Nebraska agricultural products overall.  Moreover, Japan is Nebraska’s largest source of foreign direct investment.  Today, around 35 companies with a parent based in Japan employ at least 9,400 Nebraskans.

This year Omaha will host the 50th annual conference of the Midwest U.S.-Japan Association — the premier forum for discussions about business and trade relationships between Japan and the Midwestern United States.  The conference will take place September 9-11, 2018. 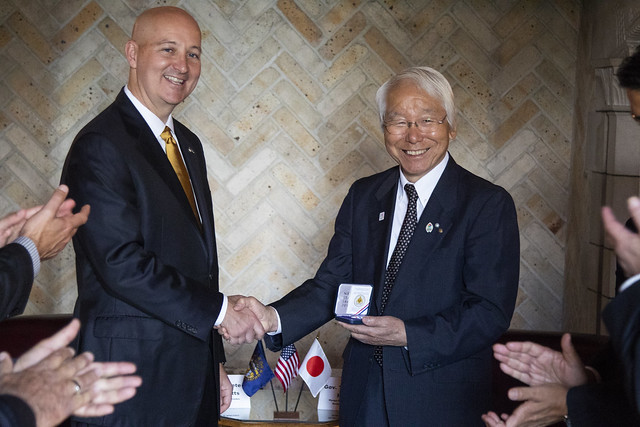