LINCOLN – Today, Governor Pete Ricketts and Czech Ambassador Dr. Hynek Kmonicek announced that the Czech Republic is opening a new Honorary Consulate for Nebraska in Lincoln, and that UNL Professor Dr. Mila Saskova-Pierce has been selected to fill this position.

The opening of the Honorary Consulate is recognition of Nebraska's long-standing cultural, governmental, military and personal ties to the Czech Republic, stretching back nearly a century since then-Czechoslovakia gained independence following the conclusion of World War I.

"83,000 Nebraskans trace their ancestry back to the Czech Republic,” said Governor Ricketts.  “Their pride in their heritage is visible in communities across Nebraska, especially during the numerous annual Czech Heritage Festivals.  We are honored by the decision of the Czech Republic Government to establish an honorary consulate here in Nebraska.  Dr. Mila Saskova-Pierce will be a great representative in our state, and will help strengthen our ties."

Dr. Mila Saskova-Pierce received her Masters and Ph.D. in Slavic and General Linguistics at the University of Kansas. She has published articles on learning processes; American Czechs' cultural history; Russian, Ukrainian, Slovak, Polish, and Czech languages in the United States. At present, she is researching the modalities of teaching foreign languages over the Internet. Under her advising, the Czech Komensky Club received the Gratias Agit Prize in 2005 from the government of the Czech Republic for its cultural programming at UNL. She has been involved in the cultural programming of the UNL Russian Club as well.

Monday's announcement came as a part of a trip by Ambassador Kmonicek to Nebraska. He spent the morning visiting with Maj. Gen. Daryl Bohac, Nebraska adjutant general, and members of the Nebraska National Guard discussing the current state of the Guard's State Partnership Program relationship with the Czech Republic Armed Forces, which will celebrate its 25th anniversary in July 2018.

"We had a great meeting this morning with the ambassador about the work that members of the Nebraska National Guard - in concert with our fellow Soldiers and Airmen from the Texas National Guard - are doing with the members of the Czech Armed Forces through the National Guard's State Partnership Program," said Major General Bohac.  "These exchanges are now truly about information and experience-sharing that have added significantly to the capabilities of all three participating organizations, while also building significant personal ties between the individuals involved. We have all helped each other build better capabilities for the very real missions that we are doing around the world together." 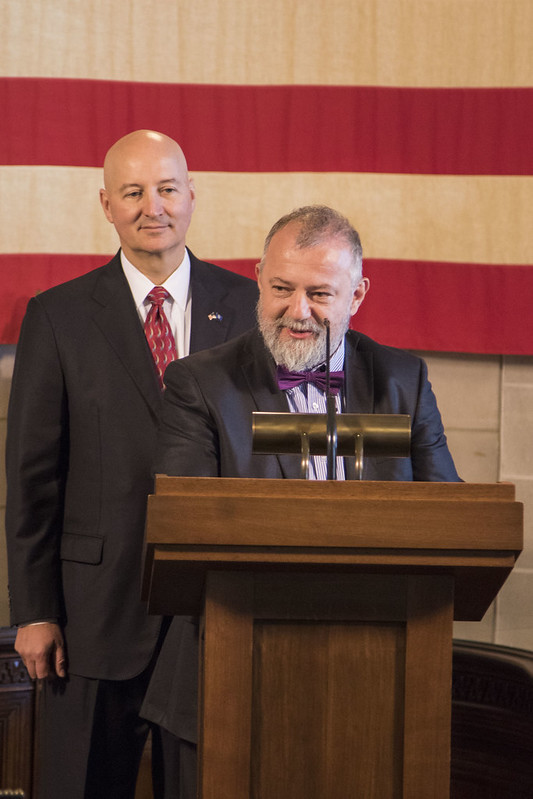