Governor Ricketts poses for a picture after presenting a Vietnam veteran with his commemorative pin.

LINCOLN – Today, Governor Pete Ricketts hosted a ceremony in the Governor’s Hearing Room at the State Capitol to honor the veterans of the Vietnam War and their spouses.  Veterans from across Nebraska joined the Governor as he signed a proclamation and presented commemorative lapel pins to veterans and their spouses as a symbol of gratitude from Nebraskans for their service.

“Today, we honored several of the unsung heroes of the Vietnam War,” said Governor Ricketts.  “Our Vietnam veterans fought bravely to defend the cause of freedom during a tumultuous time for our country.  Honoring them for their service matters not only to them, but it is also a critical reminder of the sacrifices that have been made to protect our Republic and our freedoms.”

March 29th is National Vietnam Veterans Day in America.  Many states and municipalities held events today to honor Vietnam veterans for their years of service.  Living United States veterans who served on active duty in the United States Armed Forces at any time from November 1, 1955 to May 15, 1975, are eligible to receive one lapel pin.

“Honoring our state’s veterans is a crucial piece of the work we do at the Nebraska Department of Veterans’ Affairs (NDVA),” said NDVA Director John Hilgert.  “Our agency is dedicated not only to helping veterans receive the benefits available to them, but to honoring them, thanking them, and recognizing them for the sacrifices they have made protecting our country.  I want to thank all of our state’s Vietnam-Era veterans for their courage, honor, and dedication to serving our nation.”

“It was long overdue that we created a commemoration honoring our Vietnam veterans,” said Major General Daryl Bohac.  “What these men and women went through forever changed the landscape of how the American people view the military.  We now wear the uniform with pride because we have the support of the American people.  We have them to thank for that, and it is with great pride that we say to them, ‘Welcome Home’.”

“Today I am grateful that we as a nation can now separate the war from the warrior and truly honor those who serve,” said Jeff Smith, Navy Vietnam veteran.  “I am grateful for the 1,200 places in the country which will honor Vietnam veterans and their families today.  I am especially proud to be part of the Nebraska tradition, which honors those who have served and are serving our country.”

Over the past few years, Governor Ricketts has worked with the Legislature and veterans’ groups to place a focus on supporting Nebraska’s military families and veterans.  Previous initiatives include:

Signing LB 88e (2017) into law, which authorized the Department of Health and Human Services to issue temporary licenses for occupations regulated under the Uniform Credentialing Act to military spouses. 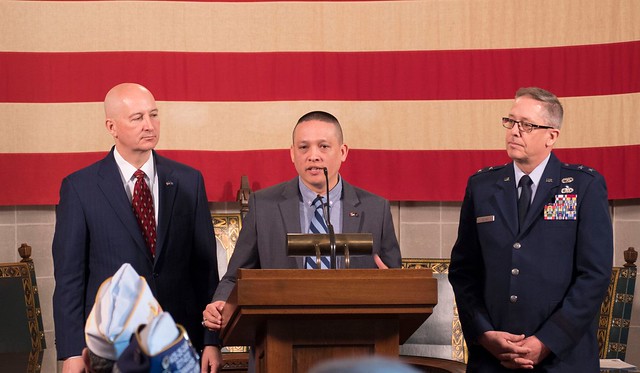