Gov. Ricketts greets Walter Barsell of Wahoo during a ceremony at the State Capitol honoring

veterans from across the state.

LINCOLN – Today, Governor Pete Ricketts hosted a ceremony at the State Capitol to honor veterans of the Korean War.  Over 300 people, including veterans from across Nebraska and their family members, joined the Governor for the ceremony.  At the ceremony, the Governor signed a proclamation and presented Ambassador for Peace medals to veterans, surviving spouses, and family members as a symbol of gratitude from Nebraskans and the Republic of Korea for their service.

“My administration strives to make Nebraska the most veteran-friendly state in the nation, both in providing excellent service to our veterans and in recognizing and honoring them for their bravery and sacrifices,” said Governor Ricketts.  “I want all our state’s veterans to know how much we appreciate them.  While the Korean War is often referred to as ‘the Forgotten War,’ today’s ceremony is a reminder that Nebraskans have not forgotten our veterans or the sacrifices they have made in defending our republic.”

July 27th is National Korean War Veterans Armistice Day in America, which marks the signing of the Korean Armistice Agreement.  This year is the 65th anniversary of the signing of the proclamation.  A full list of the veterans honored today at the State Capitol and at home in communities across the state

The Ambassador for Peace medals were created by the Republic of Korea’s Ministry of Patriots and Veterans Affairs.  Korean War veterans who served in Korea between June 25th, 1950, and July 27th, 1953, or participated in UN Peacekeeping operations in the country before January 1st, 1956 were eligible.

“There are many ways to honor our state’s veterans, and this is just one step we’re taking to do that,” said Nebraska Department of Veterans’ Affairs (NDVA) Director John Hilgert.  “Whether it’s through recognition, benefits, advocacy, care in one of our facilities, or any other service we can provide, serving Nebraska’s veterans is our mission, our passion, and our duty.” 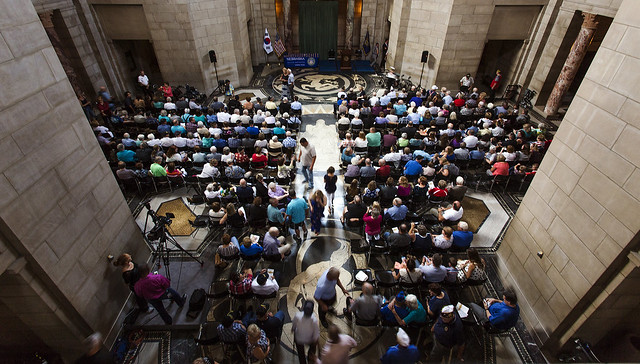