“The ethanol industry is a prime example of how we can add value to the agriculture commodities that we grow right here in Nebraska,” said Governor Ricketts.  “Through the process of turning corn into ethanol, several other co-products are produced, including distillers grains, corn oil, corn syrup, and dry starch.  This is the type of value-added agriculture that helps create jobs, increase demand of locally-grown commodities and attract new businesses which is all part of growing Nebraska.”

Governor Ricketts, chairman of the Governor’s Biofuels Coalition, is a strong advocate of the Renewable Fuels Standard (RFS) to help provide stability and certainty for partners in the ethanol industry.

Nebraska is the second largest producer of ethanol in the United States, with the industry continuing to invest in their facilities.  In the past two years, companies have invested more than $190 million in ethanol plants in Jackson, Fairmont, Adams, Columbus, and Kearney to increase capacity and product diversification.

“Nebraska has all the resources necessary for companies to be successful when they invest in our state,” said Governor Ricketts.  “Working with my agencies, we have been successfully pursuing several strategies to grow value-added agriculture.  These programs are designed to attract additional business and support private-sector firms adding value to Nebraska’s quality ag commodities.”

In addition to successes in the area of ethanol, Nebraska has seen millions of dollars of investments by other types of value-added agriculture firms. These investments include:

Representatives from a number of major value-added investments praised the work of state officials in making Nebraska a great place to do business:

“In Costco’s experience, Nebraska has earned its place as one of the best states in the country to do business.  We selected Nebraska for our first-ever poultry processing facility because of its welcoming communities, central location, and hardworking ag producers who have embraced our project.  As we considered locations, state officials made themselves available to our team, delivered a customer-friendly experience, and successfully made the case that Nebraska was the best place for us to build this value-added operation that will serve to grow our trusted brand for years to come,” said Jeff Lyons, Costco Senior Vice President GMM of Fresh Foods.

“Nebraska is a great place to do business for several reasons.  The people are outstanding.  Friendly, honest and hardworking.  We have developed a specific culture here at Novozymes, and that great culture is because of the people that come here every day, ready to make a difference.  Nebraska is also a great place to do business because of the support that we get from everyone in Blair and Washington County, all the way to Governor Ricketts who supports our industry every chance that he gets.  Lastly, I see our partnerships with other local companies as extremely helpful in delivering our product to our customers in an efficient, timely manner and with the best quality.  When you consider these and other reasons, Nebraska is clearly a great place to do business.” said Kyle Nixon, General Manager of Novozymes in Blair.

“As one of the nation’s top popcorn production states, popcorn is a high-quality, value-added product that creates new opportunities and jobs for Nebraska’s farm families.  Governor-led trade missions and Nebraska’s international trade team have helped Preferred Popcorn establish partnerships around the globe that are helping us grow our business and Nebraska,” said Norm Krug, CEO of Preferred Popcorn in Chapman.

During the news conference, the Governor and others outlined several of the strategies the state has been using to land new value-added agriculture investment.

The Nebraska Energy Office is supporting over $5 million of investment in order to make higher blends of ethanol available to Nebraska drivers. The total number of pumps offering E-15, E-85, and other high-ethanol blends are expected to nearly double statewide. Since 2015, 70 pumps at 19 retail outlets have received grant funding, using funds from USDA’s Biofuels Infrastructure Program.

“Nebraska is among the top states producing ethanol for motorists around the country, and the world,” said Energy Office Director David Bracht.  “Nebraska drivers now have more access to higher-ethanol blend fuels like E-85 and E-15, which burn cleaner than regular fuels and save money.”

“The Prototype grant came in at just the right time.  With the funding from DED, product development was able to continue during the time before getting investment, which was really important to keep the company going,” said Quantified Ag CEO Vishal Singh.

“IntelliFarm’s ongoing work in research and product development is aligned with our company’s overall efforts to protect agricultural equipment, which is integral to a producer’s operational success,” said IntelliFarm CEO and President Steve Tippery.  “Having an opportunity to receive assistance from two of Nebraska’s Business Innovation Program funds has been an important component of our company’s growth in the past two years.”

Another incentive that DED utilizes is the Site and Building Development Fund (SBDF).  As local economic development teams emphasize efforts to grow Nebraska’s workforce, recruiting and retaining skilled labor often work in tandem with a region’s overall industrial readiness.  The SBDF is a tool designed to help Nebraska communities and organizations with competitive attraction and expansion projects.

Murdock-based Oxbow Animal Health develops and markets fortified food and supplements dedicated to small animal nutrition in 35 countries.  In 2017, the company will celebrate the grand opening of its 247,000 square foot business campus in southwest Omaha.  Oxbow’s executive team worked with DED to secure a $200,000 Site and Building Development Fund Grant for the project, as well as $64,000 in Customized Job Training.

“Over the past 17 years, our company has grown from 20 to 140 employees,” said Oxbow Animal Health Founder and President, John Miller.  “Industry partnerships and state resources have both contributed to Oxbow’s growing workforce and global presence.  SBDF has enabled our company to move closer to a larger labor pool for additional access to skilled workers.”

An Oxbow executive said these efforts contributed to a 92% increase in sales in Japan following the signing of a new distribution agreement in 2014.  Also the STEP grant opened up opportunities for Oxbow in Greece, where the company conducted seminars for top veterinarians, and developed customized marketing pieces, resulting in a 128% sales increase in the country.

During the past four years, Nebraska’s STEP Grant has assisted 77 small businesses with 453 unique activities, generating more than $42 million in increased exports to date.  Participation in the STEP Grant Program has assisted non-exporting small businesses enter international markets and opened new and expanding markets for current small business exporters.  STEP clients have identified international buyers as well as agents and distributors abroad.  Additional assistance has been provided to translate materials and websites, as well as support 3rd party product testing to meet the needs of our international customers.

Last year, Governor Ricketts successfully championed the Transportation Innovation Act, which included the Economic Opportunity Program overseen by the Nebraska Department of Transportation.  The objective of the program is to finance transportation improvements to attract and support new business and existing business expansions in the state. 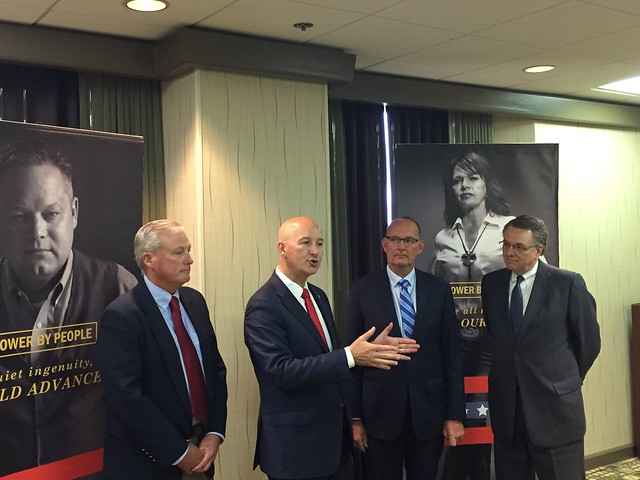