“The Nebraska150 Express will provide the opportunity for communities across Nebraska to celebrate in our state’s sesquicentennial,” said Gov. Ricketts. “I appreciate Union Pacific, a company that has had such an important and positive impact on Nebraska, taking such a vested interest in our state’s celebration of its great history.”

After departing from Omaha, the locomotive will travel to Columbus, North Platte, Ogallala, Sidney, Gering, Kearney, and Grand Island, where each community will host a rally or festival to welcome the train’s passengers.  The Nebraska150 Celebration has extended invitations to a select group of Nebraska native celebrities and notable figures it hopes will be part of the tour.  These individuals will disembark to give speeches, take photos, and/or sign autographs for audiences.

“The Nebraska150 Celebration is incredibly grateful to Union Pacific for its generous support of this event and commitment to our state,” said First Lady Shore.  “Our histories are inextricably linked.  We have, in many ways, grown up together.  I can’t think of a more fitting way to celebrate this historic occasion than with a fun train tour that harkens back to days gone by.”

"Union Pacific is thrilled to be part of our home state's sesquicentennial celebration, visiting communities along the original transcontinental railroad route with our proudly restored, decades-old heritage equipment,” said Fritz.  “We value our long-standing relationships with communities along UP lines, many of which were developed as a result of the railroad.  We look forward to celebrating with them and other Nebraskans in August."

Gering Mayor Tony Kaufman said, “Today’s announcement is exciting for the City of Gering and our residents.  Now we begin the process of brainstorming ideas and organizing our whistle stop event; food, flags, and entertainment featuring local musicians will set the stage for us to welcome dignitaries and showcase Gering’s history and hospitality in celebration of Nebraska’s 150th birthday.”

Kearney Mayor Stan Clouse said, “Nebraska’s 150 Celebration is a tremendous opportunity to showcase our state and communities and, as such, Kearney is excited to participate in all of the events, but especially the Whistle Stop Tour.  Kearney exists today because of the historical migration of settlers utilizing trails and railroads as they settled the west.  We are proud of our heritage and our outstanding committees and volunteers are working hard to ensure the Whistle Stop Tour will long be remembered.”

Following is a preliminary schedule for the tour.  Additional times, specific locations and additional details will be announced closer to the date of the event.  To ensure the trip remains on schedule and the tour reaches as many Nebraskans as possible, public train tours and tickets are not available. 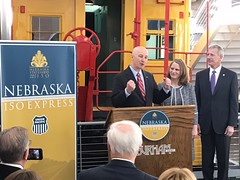 ABOUT THE NEBRASKA150 CELEBRATION

Planning for the Nebraska150 Celebration began in 2012 when a group of active citizens from across the state formed the Friends of the Nebraska150 Foundation.  In 2014, the Nebraska Sesquicentennial Commission was established by the Legislature and 17 members from across the state were appointed by the Governor to lead the initiative. In 2015, the Celebrating Nebraska Statehood Foundation was established to help coordinate efforts and direct everyone toward collective success.

Union Pacific Railroad is the principal operating company of Union Pacific Corporation (NYSE: UNP). One of America's most recognized companies, Union Pacific Railroad connects 23 states in the western two-thirds of the country by rail, providing a critical link in the global supply chain. From 2007-2016, Union Pacific invested approximately $34 billion in its network and operations to support America's transportation infrastructure. The railroad's diversified business mix includes Agricultural Products, Automotive, Chemicals, Coal, Industrial Products and Intermodal. Union Pacific serves many of the fastest-growing U.S. population centers, operates from all major West Coast and Gulf Coast ports to eastern gateways, connects with Canada's rail systems and is the only railroad serving all six major Mexico gateways. Union Pacific provides value to its roughly 10,000 customers by delivering products in a safe, reliable, fuel-efficient and environmentally responsible manner.