CHAPMAN – Today, Governor Pete Ricketts applauded a successful public-private partnership between the State of Nebraska, Merrick County officials, and a Chapman business leader.  This partnership was created to grow Nebraska’s reputation as a global commodities competitor.  The state’s first-ever Economic Opportunity Program (EOP) grant will provide support for infrastructure in Merrick County in conjunction with an expansion project for Chapman-based Preferred Popcorn, LLC.  The Nebraska-grown business processes conventional and organic popcorn and sells 99% of its products to vendors outside Nebraska.

“Strong partnerships between the Governor’s office and state agencies helped finalize Preferred Popcorn’s decision to expand and maintain its global headquarters in Nebraska, and to qualify for Nebraska’s first EOP grant,” Governor Ricketts said.  “My administration appreciates the opportunity to keep globally-competitive, innovative businesses like Preferred Popcorn in Nebraska, which markets nearly 50 percent of its products internationally.”

As part of the 2016 legislature-approved Transportation Innovation Act, Nebraska’s EOP will be facilitated through a partnership between the Department of Transportation (DOT) and Department of Economic Development (DED).  The program was designed to attract and retain businesses through new opportunities in infrastructure development in economic regions across the state.  DOT Director Kyle Schneweis and DED Director Courtney Dentlinger joined the Governor in Merrick County to celebrate the project’s groundbreaking.  Preferred Popcorn’s expansion is scheduled for completion in the spring of 2018.

Preferred Popcorn’s $6 million expansion project will create approximately 10 new full-time positions in Nebraska to grow its manufacturing and distribution capabilities, and open the door for an additional $25 million dollars in annual production contracts with local farmers.  The company worked extensively with DOT and DED officials to secure grant funding for the project.  In addition to the EOP grant, guidance from DED’s staff helped Merrick county secure a federal $300,000 Community Development Block Grant (CDBG) to assist the company through South Central Economic Development District.  The grant includes a $150,000 loan to the business at zero percent interest.

Preferred Popcorn employs 35 full-time employees in Nebraska, and additional employees at its locations in Palmyra, IN, and Trenton, MO.  While company executives had at one time considered growing outside of Nebraska, ongoing collaboration with the DED and DOT led to their decision to expand operations at the Chapman facility.  Additionally, Preferred Popcorn CEO Norm Krug joined Gov. Ricketts’ Nebraska Delegation on an international trade mission to China in 2016.  While there, Gov. Ricketts and Preferred Popcorn announced a new contract with their long-time partner in China, Zhong Liang Tian Run (ZLTR) Trading Inc.

More than 75 vehicles travel up and down the gravel road leading to Preferred Popcorn’s facility each day.  The road will serve more than 150 cars, trucks and transport carriers daily with the new expansion.  Pending confirmation from the Merrick County Board of Supervisors on the grant agreement, Merrick County and the DOT will divide the cost of paving Road 9 between US-30 and the Preferred Popcorn facility.  DOT will fund up to $500,000 of the project based on a 50/50 cost share agreement.  The project will include paving approximately 1.25 miles of Road 9, which is currently gravel, and was a key consideration in Preferred Popcorn’s decision to expand at its Chapman location.

“Making smart investments in our state’s infrastructure is critical to growing economic opportunity in Nebraska.  This means making it easier for Nebraska businesses to get their products to market – whether that’s up the road or in to the global marketplace,” said DOT Director Kyle Schneweis.

“Preferred Popcorn is exporting its Nebraska-grown products to 70 countries around the globe,” DED Director Courtney Dentlinger said.  “The Economic Opportunity Program is allowing the Departments of Transportation and Economic Development to work together to put in place necessary transportation infrastructure, allowing great companies like Preferred to expand and grow our state economy.”

Applicants must demonstrate the ability to produce positive economic impacts in their regions and matching funds are required for each project.  DOT and DED work collaboratively to select grant recipients.

For more information about Nebraska’s EOP, contact Jeni Campana at the Department of Transportation at Jeni.Campana@nebraska.gov. 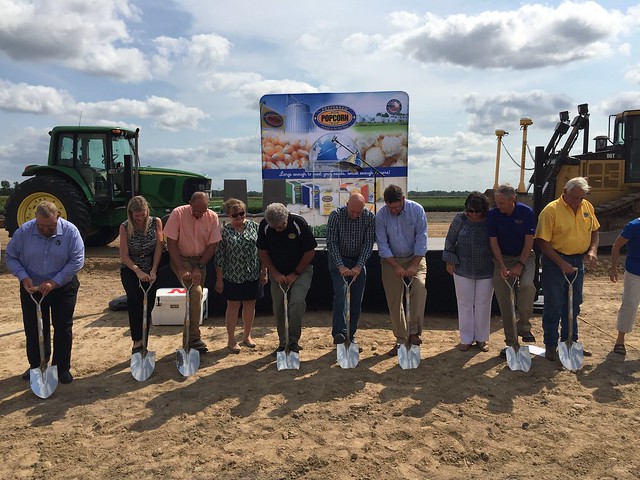