LINCOLN – Today, Governor Pete Ricketts was joined at the State Capitol by representatives from Nebraska’s beef industry to celebrate Beef Month.  Beef Month is celebrated in Nebraska every May to highlight the importance of the cattle industry to the state.  The Governor hosted a press conference to sign a proclamation and give an update on the growing beef industry in Nebraska.

“May is Beef Month in Nebraska, a time to recognize the state’s beef producers and celebrate the many ways Nebraska leads the nation in beef,” said Governor Ricketts.  “Nebraska is the ‘Beef State’ because our beef producers are second-to-none in quality and lead the nation in market share.  Nebraska ranks number one in the nation in commercial red meat production and all cattle on feed.”

Nebraska is first in the nation in rankings for beef exports, commercial cattle slaughter, and cattle on feed.

“Nebraska is a national leader in all aspects of the beef industry including production, exports, and cattle on feed, so we’re pleased that Governor Ricketts proclaimed May as Beef Month,” said NDA Director Steve Wellman.  “The continued growth of the beef industry in Nebraska and the top rankings we’ve achieved show our support of agriculture as a whole and confirms what we already know: that delicious Nebraska beef is being enjoyed by consumers here at home and around the world.”

“There are a lot of unsung heroes who put their heart and soul into producing the best beef in the world raised right here in Nebraska,” said Galen Frenzen, President of the Nebraska Cattlemen.  “Whether you’re fixing fence on a ranch, delivering feed to the cattle, or hauling the beef to restaurants, everyone’s important to showcasing Nebraska beef!”

“Exports are a tremendous value to beef producers and we are proud to work with NDA to promote beef from Nebraska in places like Hong Kong, the European Union and other parts of the globe,” said Dawn Caldwell, Vice Chair of the Nebraska Beef Council.  “We are also very fortunate to have beef research being conducted at both the U.S. Meat Animal Research Center and the University of Nebraska.  These are just two areas that we are investing the beef checkoff into to support our beef community.” 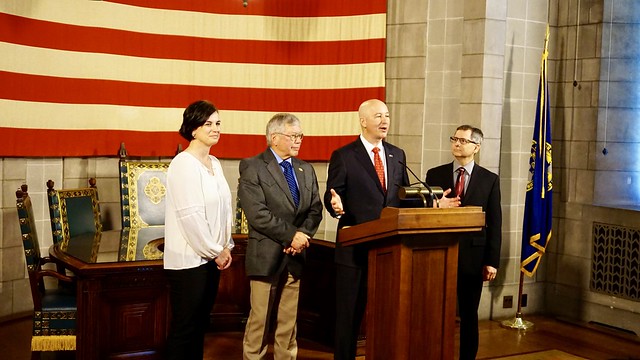