“These changes to Rule 21 are common-sense and will make it easier for teachers from military families to work in their field and serve Nebraska students,” said Governor Ricketts.  “My administration desires to make Nebraska the friendliest state for military families, and this rule change is another great way we can support them.  Today’s change will not only help support our military families, but it also connects Nebraska’s students with dedicated, high-quality teachers who will support great education in our schools.”

The three-year teaching permit will be available to military spouses who had previously taught at accredited schools in another state.  The permit will expire on August 31st of the third year following its issuance and is non-renewable.  Additionally, permit applicants must have evidence of their spouse’s current service in the military or service within the past five years.

The State Board of Education approved the revisions to Rule 21 on Friday, February 2, 2018.  It was then approved by the Attorney General and Governor Ricketts.

“Not only will the revisions to Rule 21 help qualified spouses of military personnel become teachers in Nebraska, the revisions benefit Nebraska schools and students at a time when there is a need for more highly qualified teachers,” said NDE Commissioner Blomstedt.  “The revisions recognize the commitment of military families and the asset they are to Nebraska.”

“There is a saying in the Air Force, ‘We recruit Airmen, but we retain families,’” said Shannon Manion.  “The number one reason for service members to leave the service is for their family–the spouses and children are just required to face too many hardships.  We, the spouses of Offutt Air Force Base, so appreciate the passing and signing of this revision.  The knowledge that they can obtain a job right away prior to fulfilling deficiencies goes a long way to alleviate the hardships of a move.”

Over the past few years, Governor Ricketts has placed a focus on supporting Nebraska’s military families.  Previous initiatives include: 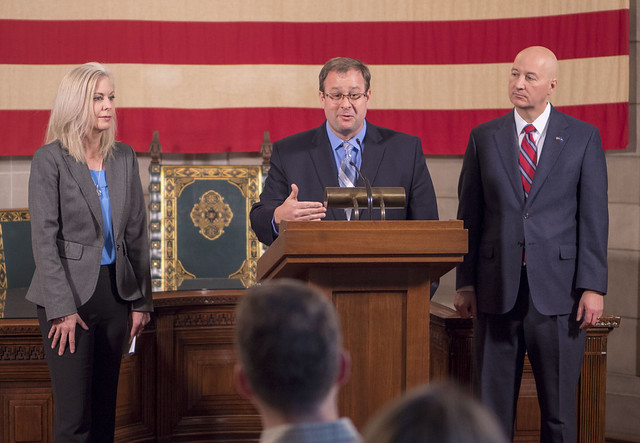