LINCOLN – Today, Governor Pete Ricketts announced that John Bolduc of San Diego, California would serve as the next Nebraska State Patrol Superintendent.  This announcement follows a national search supported by a search committee of well-respected law enforcement leaders from across Nebraska.

“The State Patrol has a long and distinguished history with troopers that have served with honor and integrity, and John will protect and build that tradition,” said Governor Ricketts.  “John comes to the agency with a reputation for improving organizations.  He has the integrity and the experience to drive continuous improvement throughout the State Patrol and lead the organization with the unimpeachable integrity Nebraskans expect.”

Bolduc, age 52, currently serves as the Vice President of Public Safety and Police Chief at the Port of San Diego.  In this role, he oversees 170 team members with an annual budget of $38 million.  The Port of San Diego is an independent public agency responsible for the management of San Diego Bay.

Since joining the Port in 2010, Bolduc has focused on shaping the Harbor Police Department into a 21st-century law enforcement agency.  He has been recognized with a Community Service Award from the National Latino Peace Officers Association and has been honored for a partnership with Lincoln and Morse High Schools to introduce students to the Port and Harbor Police. Other notable accomplishments include:

Bolduc previously served as Chief of Police for Brainerd and Mora in Minnesota.  He began his career in law enforcement as a police officer in 1986.  During his time in Minnesota, he served on and chaired the Minnesota Board of Peace Officer Standards and Training.

Bolduc holds a Master of Science in Organizational Leadership from National University and a Bachelor of Science in Criminal Justice from Bemidji State University.  He is also a graduate of the Federal Bureau of Investigations (FBI) National Academy.

“I am honored today to be selected by Governor Ricketts to lead Nebraska’s premiere law enforcement agency, the Nebraska State Patrol,” said Chief John Bolduc, the next Superintendent of the Nebraska State Patrol.  “I look forward to quickly overcoming past challenges by working collaboratively with the administration, the leadership team, the community, and our most valued resource, our troopers and staff.”

A search committee appointed by the Governor in early July assisted with identifying and vetting candidates for the Superintendent position.  Four Nebraskans served on the committee including:

“Thank you to these Nebraskans who invested their time and insights in this important search.  Their commitment to the process helped identify an exceptional pool of candidates.  The people of Nebraska are indebted to them for their contributions which will help protect public safety and ensure the State Patrol remains Nebraska’s premier law enforcement agency,” said Governor Ricketts.

Chief Todd Schmaderer chaired the committee supporting the Governor’s search.  More information about the committee can be found here.

The Governor’s appointment of Bolduc received praise from a variety of sources.

“While this opportunity represents an honor and career milestone for Chief John Bolduc, the Port is losing a dedicated leader who is respected and admired by people throughout the organization.  It has been a privilege to work with John, and he is leaving behind a department that reaps the benefit of his outstanding public service these past 7 ½ years,” said Port of San Diego CEO Randa Coniglio.

“John is a man of tremendous integrity.  Having served with him for many years in Minnesota law enforcement and on Minnesota’s Peace Officer Standards and Training Board, I know he believes in setting high standards of accountability for himself and those with whom he serves,” said Mona Dohman, Public Safety Commissioner for the Minnesota Department of Public Safety.

“John distinguished himself during this process with his diversity of experience.  He’s led organizations in small Midwestern towns and large urban communities and been successful at every step along the way.  The Governor’s choice is exactly the kind of leader needed to move the Nebraska State Patrol forward,” said Chief Schmaderer, Omaha Police Department. 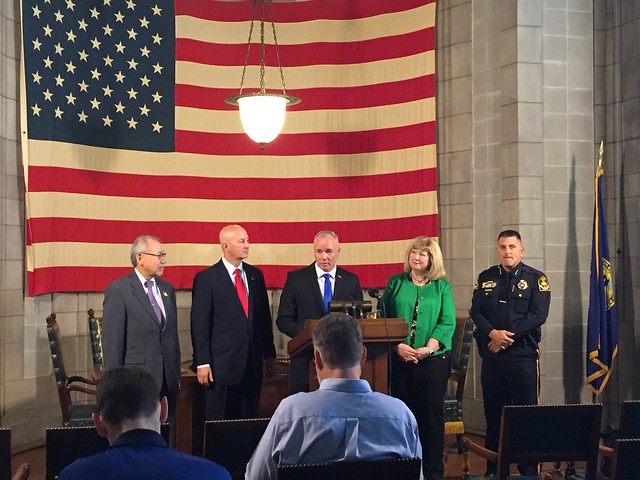