LINCOLN – Today, Governor Pete Ricketts and the Nebraska Department of Transportation (DOT) announced a record-setting $600 million in projects slated for construction across the state.  The announcement came with the release of the DOT’s Program Book for Fiscal Years 2019-2024, which details transportation projects scheduled for funding in the next one and five-year programs.

“My Administration has been committed to making investments in projects all across the state to build the 21st-century transportation network that is helping connect our communities and grow our state,” said Governor Ricketts.  “This record investment of $600 million slated for 2019 builds on the great successes we have achieved over the last few years.  Whether it’s completing our expressway system or improving our county bridges, quality infrastructure assets are foundational to creating ‘The Good Life’ and positioning our state for future growth and economic opportunity.”

“It’s an exciting time for Nebraska as we continue to make historic levels of investment in our roads and bridges,” said DOT Director Kyle Schneweis.  “Governor Ricketts along with state and local leaders have made funding for infrastructure a priority, and we’re putting every dollar to work in the most efficient and effective way possible to build a safe and modern transportation system.”

Projects slated for the upcoming year include:

DOT is responsible for nearly 10,000 miles of roads and 3,500 bridges. In the coming Fiscal Year 2019, the agency will focus on protecting prior investments that have been made in Nebraska’s statewide transportation network.

The DOT Program Book is published annually and reflects projects that have been selected for construction based on need and projected funding availability.  Funding for DOT projects comes from the State Highway Trust Fund, Build Nebraska Act, Transportation Innovation Act, and federal funds.  The Program Book can be accessed by clicking here.

Over the past few years, Governor Ricketts has worked with the Legislature and transportation stakeholders to focus on ways to modernize Nebraska’s transportation system through innovation and efficiency.  Previous initiatives include:

Over the years, Nebraska’s investments in infrastructure have helped the state earn national recognition.  The Reason Foundation rates Nebraska’s state highways fourth best in the nation for overall performance and cost-effectiveness.  U.S. News and World Report ranks Nebraska 12th in the nation for road quality. 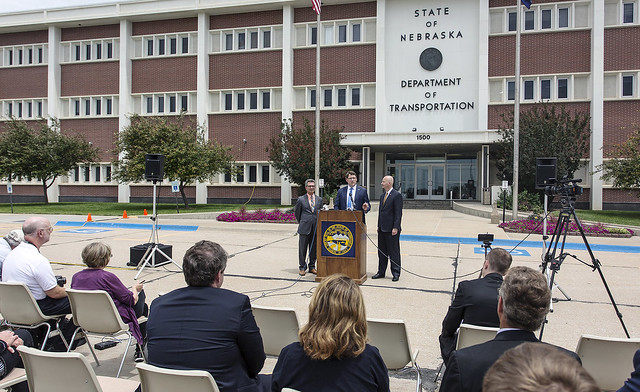