LINCOLN – Today, Governor Pete Ricketts announced plans to lead a trade mission to Canada during August 7-11, 2017.  Governor Ricketts will lead the mission in conjunction with the Nebraska Department of Agriculture (NDA) and Department of Economic Development (DED).

“In Nebraska, we export $8.5 billion worth of total exports every year, making international trade a vital part of the state’s economy,” said Governor Ricketts.  “My administration will continue to focus on trade and the opportunities it brings to Nebraska farmers, ranchers, and manufacturers to help grow our state.”

“Consumers around the world want to know more about their food and Nebraska agriculture,” said NDA Director Greg Ibach.  “Trade missions like this give Nebraska farmers and ranchers an opportunity to interact with consumers and agribusiness leaders in different countries and show them the quality ag products that the state has to offer.”

The Governor’s Office, NDA, DED, and Canadian officials developed the Nebraska delegation’s itinerary for the upcoming trade mission with visits to Toronto and Ottawa.  Meetings have been requested with Canadian prime ministers, other national officials, and agricultural officials including representatives from the Canadian Cattlemen Association and the Canadian Pork Council.

“The key to export success is building on existing relationships and creating new opportunities in international marketplaces,” said Governor Ricketts.  “Our trade team is able to share their knowledge base in a personal, meaningful way which will result in more sales in the future.”

Throughout the trip, Governor Ricketts and the Nebraska delegation will have opportunities to meet with current and potential investors, as well as host events to promote Nebraska ag products.

The news of a trade delegation heading to Canada follows last week’s news about Nebraska beef heading to China for the first time in 14 years.  Opening world markets and keeping them open depend on trade agreements and protocols negotiated at the federal level.

"Out of all the states that are sending beef internationally, Nebraska leads the way,” said Ibach.  “We will continue to invest in the future by focusing attention on all of our partners across the globe and spreading the good news about Nebraska ag products.”

The Governor encourages Nebraska agriculture and business representatives to consider joining the Canadian trade mission for an opportunity to meet with government officials, community leaders, and industry representatives.  Because space is limited, company officials interested in participating in the trade mission should register by July 5, 2017 by calling 402-471-2341 and asking for Stan Garbacz. 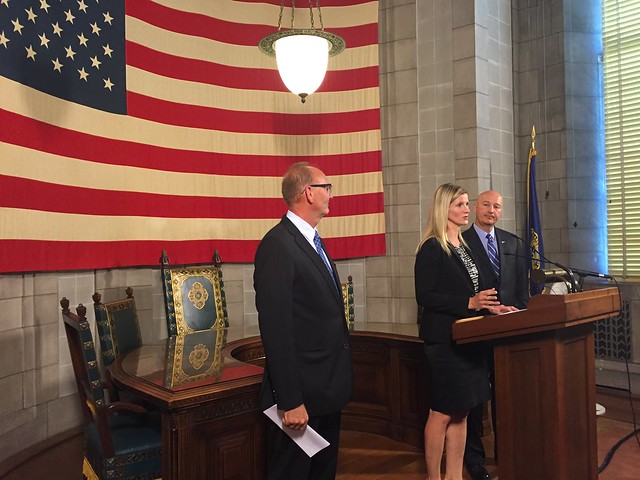