XI’AN, CHINA – Today, Governor Pete Ricketts announced that the Nebraska Department of Economic Development (DED) had signed an agreement with Chinese officials to create a working demonstration farm, known as the Nebraska (Yangling) Agricultural Sci-tech Park.   Under the agreement, the farm will be capitalized and managed by Chinese partners, and will showcase the equipment of Nebraska-based farm equipment manufacturers.  The project is a partnership among the State of Nebraska, the University of Nebraska—Lincoln, and the Yangling Agriculture Hi-tech Demonstration Zone located in China’s Shaanxi Province.

“China’s increasing demand for Nebraska’s 21st-century ag technology is helping our state’s manufacturers grow and expand internationally,” said Governor Ricketts.  “The promise of this demonstration farm is a big win for our state’s top two industries, agriculture and manufacturing.  The farm gives Nebraska’s ag tech manufacturers increased access to Chinese ag producers who are looking for ways to make their operations more productive.”

The 80-hectare demonstration farm is located in the Shaanxi Province of China.  The farm will assist Nebraska agricultural manufacturers in entering and expanding Chinese markets by demonstrating Nebraska products and technology in a way that will also help improve Chinese agricultural methods.  Training and education will be provided through a unique collaboration involving a private sector and public sector partnership among DED, University of Nebraska, Nebraska agricultural manufacturers, Chinese producers, Northwest Agriculture and Forestry University, Yangling Agricultural Hi-tech Industries Demonstration Zone, and the Chinese government.

The farm will be managed by a subsidiary of Roffar Holdings.  Nebraska manufacturers will provide equipment and technical expertise while the University will provide technical and agronomic advice and assist with farm planning.  This will give Nebraska companies a platform to advertise and demonstrate to potential customers and partners.

DED, partner manufacturers and the University are now working in coordination with the farm management company, Northwest Agriculture and Forestry University and the Yangling Demonstration Zone to finalize an operational plan for the farm and develop a management strategy for the next five years. 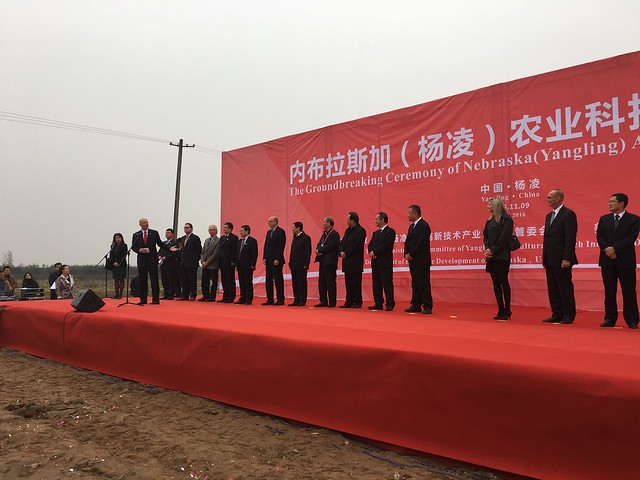 Yangling Agricultural Hi-tech Industries Demonstration Zone is located at the middle of Guanzhong plains, Shaanxi Province, 82 kilometers from Xi’an.  It covers an area of 135 square kilometers, with a total population of 200,000.  At present, there are more than 1000 registered enterprises with focuses including biopharmaceuticals, green food, environment-friendly agricultural means of production and agricultural and pastoral quality seeds.