Gov. Ricketts and the O’Rourke Family.

LINCOLN – Today, Governor Pete Ricketts joined Sand County Foundation, the Alliance for the Future of Agriculture in Nebraska (AFAN), Cargill, and the Nebraska Environmental Trust to announce the O’Rourke Family’s RuJoDen Ranch as the recipient of the 2018 Nebraska Leopold Conservation Award®.  The annual award honors Nebraska landowner achievement in voluntary stewardship and management of natural resources.

“Nebraska’s farmers and ranchers are the original conservationists,” said Governor Ricketts.  “Congratulations to the O’Rourke family on this great honor.  Their work at the RuJoDen Ranch demonstrates how private land owners consistently help feed the world while caring for and conserving the land and habitat they utilize every year.  People like the O'Rourke family are helping set the standard for farmers and ranchers across our state and the nation.”

ABOUT THE O’ROURKE FAMILY’S RANCH NEAR CHADRON

Jim O’Rourke’s grandparents, Frank and Jerene, became the second family to steward this land along the Pine Ridge south of Chadron in northwestern Nebraska in 1950.  A sign they erected, which reads, “O’Rourke - RuJoDen Ranch - Wildlife Habitat,” reflects the family’s commitment to a land conservation ethic.

Previously cultivated fields have been seeded with perennial grasses to stabilize and rebuild soil health.  Grazing management along the riparian areas of Chadron Creek, has resulted in a multi-age class of hardwoods as well as increased tree and shrub diversity, ideal for a variety of wildlife.  Stable banks, overhangs and shady, cool water provides for good fish habitat.  Invasive cedar trees were removed from the riparian areas and uplands to further improve wildlife habitat.  The ponderosa pine forest was thinned to improve tree health and reduce fuel loads, which proved effective in saving the majority of the timber stand during the 2012 wildfire.

The O’Rourke family realizes the increasing number of smaller acreage ranches need to be diversified to be sustainable and have implemented a myriad of practices including, beekeeping, pasture raised poultry, deer and turkey hunting, a horse-motel and an agro-tourism endeavor.  Guests have the opportunity to stay in historic sheep herder wagons and hunt, fish, hike or simply “un-plug” from the modern world.

Through multiple generations, the O’Rourke family continues to carry on a traditional land ethic which is guided by a wisdom that all systems are connected and must work together to achieve true land conservation.

The Leopold Conservation Award is presented in honor of renowned conservationist and author Aldo Leopold, who called for an ethical relationship between people and the land they own and manage.  Award applicants are judged based on their demonstration of improved resource conditions, innovation, long-term commitment to stewardship, sustained economic viability, community and civic leadership, and multiple use benefits.

“Governor Ricketts understands that Nebraska’s farmers and ranchers are integral to the health of the state’s natural resources,” said Kevin McAleese, Sand County Foundation President.  “We appreciate the Governor’s continued participation in this important celebration of sustainable agriculture on private lands.”

“AFAN is proud to support the Leopold Conservation Award and we are excited that the O’Rourke family from the Pine Ridge area is joining the ranks of many Nebraska landowners who have won this prestigious award,” said Emily Skillett, AFAN livestock programing coordinator.  “Conservation on private land is alive and well in all sectors of agriculture.  The O’Rourke family has used conservation practices to protect their land and to create sustainable wildlife habitat.”

“The Nebraska Environmental Trust is proud to be part of the annual Leopold Conservation Award in Nebraska recognizing families that do so much for conservation like the O’Rourkes,” said Mark Brohman, Nebraska Environmental Trust Executive Director.  “The O’Rourkes have educated so many people not only in the classroom and on their property, but all over the Midwest and even internationally.  From forest thinning to reduce fire danger, reseeding past fields, promoting wildlife and showcasing diversity to be sustainable, they have done so much and are very deserving of the Leopold Award.”

“Cargill applauds Jim and Lora O’Rourke for their life long devotion to conservation and agriculture,” said Sammy Renteria, general manager of Cargill in Schuyler.  “Like many other Nebraskans, the O’Rourke’s have cultivated a conservation ethic handed down to them by their family.  They not only implement it on their land but work tirelessly to educate others on how to do the same.  We are proud to support the recognition of such a deserving family.”

ABOUT THE LEOPOLD CONSERVATION AWARD

ABOUT AFAN (Alliance for the Future of Agriculture in Nebraska)

AFAN was formed in 2005 by the leading agricultural organizations in Nebraska to conduct outreach, promotion and provide information to consumers about Nebraska agriculture and where their food comes from. In 2015, these organizations saw another need, advancing livestock development and agriculture and food processing businesses in Nebraska. Since then AFAN has been primarily focused on encouraging the development of livestock and working with communities and Nebraska leaders to create opportunities for industries that add value to Nebraska’s agricultural output and energize the economy.

Cargill provides food, agriculture, financial and industrial products and services to the world.  Together with farmers, customers, governments and communities, Cargill helps people thrive by applying its insights and 150 years of experience.  Cargill has 149,000 employees in 70 countries who are committed to feeding the world in a responsible way, reducing environmental impact and improving the communities where we live and work.  Cargill is passionate about their goal to be the global leader in nourishing people and operating responsibly across the agricultural, food, industrial and financial markets they serve.

The Nebraska Environmental Trust was established in 1992 to conserve, enhance and restore the natural environments of Nebraska.  It was created on the conviction that a prosperous future is dependent upon a sound natural environment and that Nebraskans could collectively achieve real progress on real environmental issues if seed money were provided. 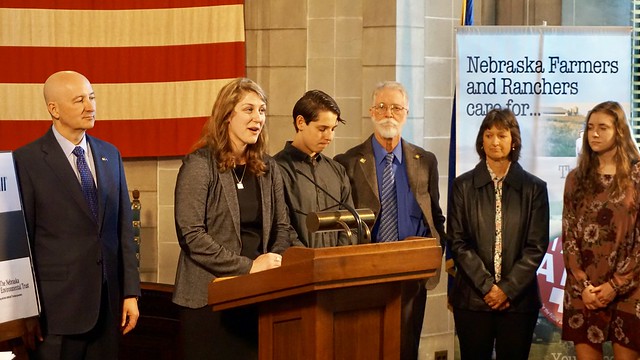