Kurt and Wayne Kaup own and manage K & W Farms in Stuart, Neb., where they raise hogs and crops. With a commitment toward improving natural resources on the land, the Kaups are leaders in implementing no-till farming strategies combined with the use of cover crops to improve the soil, reduce erosion, and recycle nutrients.

Understanding that their farming practices impact the environment around them, wildlife, from pollinators and songbirds to deer and waterfowl, benefit from the family’s conservation practices. The environmental gem of K & W farms is a spring-fed cold water trout stream that originates on the property, which has produced a strong conservation partnership with Nebraska Game and Parks and the Natural Resources Conservation Service.

“Congratulations to the Kaup family on winning this coveted award,” said Governor Ricketts. “Nebraska’s Farmers and ranchers are the original conservationists of our great state. Long before modern conservationists organized, ag producers were caring for and tending the land, so they could pass it on to the next generation.  The Kaup family are an excellent example of how conservation and agriculture continue to work hand-in-hand to grow Nebraska.”

The Leopold Conservation Award is presented in honor of renowned conservationist and author Aldo Leopold, who called for an ethical relationship between people and the land they own and manage.  Award applicants are judged based on their demonstration of improved resource conditions, innovation, long-term commitment to stewardship, sustained economic viability, community and civic leadership, and multiple use benefits.

“Governor Ricketts understands that Nebraska’s farmers and ranchers are integral to the health of the state’s natural resources,” said Kevin McAleese, Sand County Foundation President.  “We appreciate the Governor’s continued participation in this important celebration of sustainable agriculture on private lands.”

“Nebraska Cattlemen is excited that a hog producer has joined the ranks of the many cattlemen and women who have won this prestigious award. Conservation on private lands is thriving in all sectors of agriculture.  Kurt and Wayne have shown tremendous dedication to their land, and we are proud to welcome the Kaups into the Nebraska Leopold family,” said Nebraska Cattlemen President Troy Stowater.

“The Nebraska Environmental Trust is very honored to be part of the annual Leopold Conservation Award in Nebraska recognizing families that do so much for conservation like the Kaups,” said Mark Brohman, Executive Director of the Nebraska Environmental Trust.  “The Kaups have demonstrated their love of the land by their no-till practices, use of cover crops, management of their cold water stream, pollinator plantings, and other habitat work.  They also participate in their community and share their knowledge.”

“Cargill appreciates the valuable work farmers and ranchers across Nebraska do each day as responsible stewards of the environment and natural resources,” said Brett Walters, general manager of Cargill in Schuyler. The Kaup family demonstrates the positive impact responsible land management and conservation practices have on soil health and wildlife habitat preservation through their leadership, management practices, and continued commitment to enhance and improve their efforts for a more sustainable future.

ABOUT THE LEOPOLD CONSERVATION AWARD

ABOUT THE NEBRASKA CATTLEMEN

Cargill provides food, agriculture, financial and industrial products and services to the world.  Together with farmers, customers, governments and communities, we help people thrive by applying our insights and 150 years of experience.  We have 149,000 employees in 70 countries who are committed to feeding the world in a responsible way, reducing environmental impact and improving the communities where we live and work.  We are passionate about our goal to be the global leader in nourishing people and operating responsibly across the agricultural, food, industrial and financial markets we serve.

The Nebraska Environmental Trust was established in 1992 to conserve, enhance and restore the natural environments of Nebraska.  It was created on the conviction that a prosperous future is dependent upon a sound natural environment and that Nebraskans could collectively achieve real progress on real environmental issues if seed money were provided. 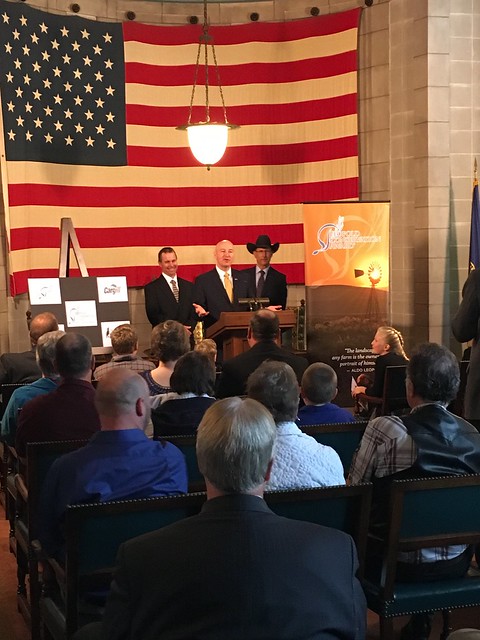