“Ag commodity prices are down, and it’s having an impact on our farm families and our state,” said Governor Ricketts.  “Agriculture is the heart and soul of our state’s economy.  Whether you ranch near Harrison or work for a food processer in Omaha, agriculture is a major driver of job creation and our economy statewide.  That is why it is so important to focus on how we can grow agriculture.  If we grow agriculture, we can grow Nebraska.”

“Today, we’re dealing with significantly lower prices for virtually every commodity we produce in Nebraska,” said Nebraska Farm Bureau President Steve Nelson.  “This means that incomes are down, and farmers are spending less – not just on equipment and machinery, but all facets of their operations, including main street purchases.  While the ag economy has slowed, we can improve our economic outlook by encouraging fiscal restraint in state and local government, supporting property tax relief, growing trade, and cutting red tape.”

In addition to tax relief, the Governor and ag associations highlighted the importance of expanding trade relationships and their continued support for the ratification of the Trans-Pacific Partnership (TPP) by Congress.

"Trade is vitally important for thriving markets, and Nebraska families and producers will benefit greatly with the passage of TPP,” said Nebraska Cattlemen President Barb Cooksley.  “America needs this agreement now.  Every day without TPP, we lose over $400,000 in beef sales to Japan.  TPP will position our country on an equal playing field with world competitors."

At the news conference, the Governor and ag associations discussed the impact of some of the onerous regulations promulgated by the Environmental Protection Agency (EPA), and called upon Nebraskans to join them in pushing back on the federal government’s overreach.

“Regulations on agriculture have become increasingly burdensome,” said Nebraska Corn Growers Association President Larry Mussack.  “Whether they directly affect our industry or those that supply inputs, the results are the same in that agriculture pays.  In June of this year, the EPA released a proposed rule that would significantly lower the level of concern for atrazine.  Although not supported by science, this proposal would essentially lead to a de facto ban on atrazine use across the Corn Belt.  We are strongly encouraging farmers to submit comments to EPA during the open comment period that ends October 5th.  Farmers can go to www.fightepa.com to submit their comments.” 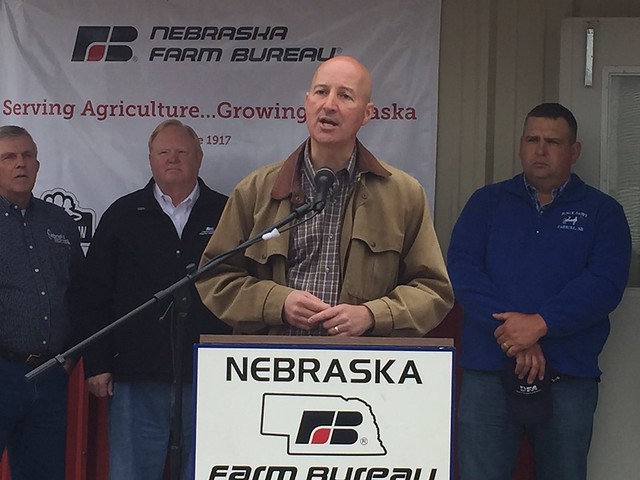