Lincoln – Today, Nebraska Governor Pete Ricketts and national and state grain industry leaders told Mexican officials that the North American Free Trade Agreement (NAFTA) has been a boon for America’s farmers and ranchers and that the US must maintain a strong partnership with Mexico.

“Bilateral trade with Mexico has helped grow agriculture in our state over the years,” said Governor Ricketts. “Mexico is Nebraska’s largest export market for corn, dairy, sugar and sweeteners, and second largest market for soybeans, wheat, sorghum and distillers grains.  All of this combined accounts for thousands of Nebraska jobs.  I’m encouraged by local and national discussions to expand trade, and am committed to helping grow our trade relationship with Mexico so we can continue to grow Nebraska.”

The Nebraska Corn Board, the U.S. Grains Council, and the National Corn Growers Association are hosting a team of Mexican grain and industry officials in Nebraska for a town hall and industry meetings, ahead of the Trump Administration’s plans to renegotiate NAFTA, a 20-year-old trade agreement between the U.S., Mexico, and Canada. Later this week, the Mexican delegation will travel to Washington, D.C., where they will join U.S. corn farmers for meetings with Congressional leaders to discuss the U.S.-Mexico trade relationship.

“Nebraska agriculture is at its best when we all work together, which includes our trading partners,” said Kelly Brunkhorst, executive director of the Nebraska Corn Board. “Mexico is currently Nebraska’s largest export market for corn, which provides $287 million in added value to our state’s economy. I’m looking forward to the positive dialogue over these next few days as we look for ways to maintain and even strengthen our relationship with this key partner.”

“Today’s farmers rely more on foreign demand for their products. Exports account for 31 percent of farmer income. When commodity prices are low, as they are now, 31 percent is an even bigger deal,” said Jon Doggett, executive vice president and head of public policy for the National Corn Growers Association. “That’s why we need strong trade agreements like NAFTA. NAFTA has been one of the most important catalysts for economic growth in our industry that I have seen.”

As a result of NAFTA, corn is exported to Mexico without tariffs or duties. Under the agreement, U.S. agricultural exports to Canada and Mexico have tripled and quintupled, respectively. One in every 10 acres of American farmland is planted to be exported to Mexico and Canada.

“The National Corn Growers Association is committed to fair and open global trade policies and practices. We will work closely with the Trump Administration and Congress to build on the successful trade relationship we have with our neighbors in Mexico, and make sure a modernized NAFTA is a win-win for both our countries,” said Doggett.

Tom Sleight, president and CEO of the U.S. Grains Council, echoed the importance of the U.S.-Mexican relationship.

“The U.S. Grains Council has worked for more than 35 years in Mexico to help local feed and livestock industries expand their production of meat, milk and eggs and to build the relationships that are the foundation for our strong, interdependent trade relationship,” said Sleight. “Having these industry leaders here in the United States this week to share how NAFTA has impacted their companies and their country is invaluable to helping us communicate how important strong trade policy with our nearest neighbors is to the continued success of U.S. grain producers and exporters.”

About Nebraska Corn Board

The U.S. Grains Council develops export markets for U.S. barley, corn, grain sorghum and related products. The Council believes exports are vital to global economic development and to U.S. agriculture's profitability. Detailed information about the Council and its programs is contained on its website www.grains.org

Founded in 1957, the National Corn Growers Association represents more than 40,000 dues-paying corn farmers nationwide and the interests of more than 300,000 growers who contribute through corn checkoff programs in their states. NCGA and its 49 affiliated state organizations work together to create and increase opportunities for corn growers. For more information, visit www.ncga.com. 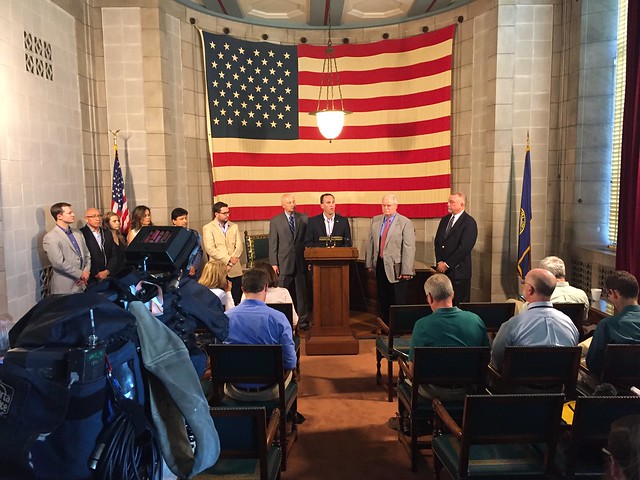