MANHATTAN, KS – Colorado, Kansas and Nebraska established an agreement this week in the longstanding conflict over water from the Republican River basin, as the Republican River Compact Administration signed two resolutions.  Representatives from the three states have been meeting monthly for over two years, in an effort to change the approach and improve how they manage interstate water matters.  This effort has created a new focus on transparency and certainty as all three states work to serve their water users.  The intent of these resolutions is to replace the need for annual reviews and instead provide long-term surety to water users.

“Signing these resolutions shows the commitment from all three states to engage in open and transparent dialogue for the past two years,” said Kansas Governor Sam Brownback.  “This long-term agreement will ultimately improve water management for water users in Kansas as well as Nebraska and Colorado.”

The resolutions signed this week will provide flexibility and greater certainty to all water users in the region, while remaining consistent with the terms of the Republican River Compact and the Final Settlement Stipulation of 2002.  The three states have been involved in various litigation and arbitrations for the past 15 years over administration of water in the Republican River basin, and this agreement is a significant and positive step forward, with the next steps focusing on working with the basin’s water users to implement these agreements.

“We are proud to be part of this historic agreement,” said Colorado Governor John Hickenlooper.  “For the first time since signing the Compact, the three states have worked together to resolve their issues without litigation and have brought certainty to the water users in the basin.  This is how we do our best work in Colorado and defines our approach to addressing our water challenges — cooperation and collaboration.”

It has been a priority of the states to collaborate on interstate water matters to ensure each state’s water users are protected while also maintaining a positive working relationship between the compacting states.

The Republican River basin begins in the plains of eastern Colorado and flows through northwest Kansas and southern Nebraska, ultimately returning to Kansas.  The Republican River Compact was negotiated during the early 1940s with participation by the states of Colorado, Kansas, and Nebraska and a representative of the President of the United States.  The Compact was formally signed in 1942.  Its purposes are to provide for equitable division of such waters, remove all causes of controversy, promote interstate comity, promote joint action by the states and the United States in the efficient use of water and the control of destructive floods, and provide for the most efficient use of waters in the Republican River basin.

The state official in each of the three states who is charged with administering water law serves on the Republican River Compact Administration.  For more information about the Compact, go to the following websites: 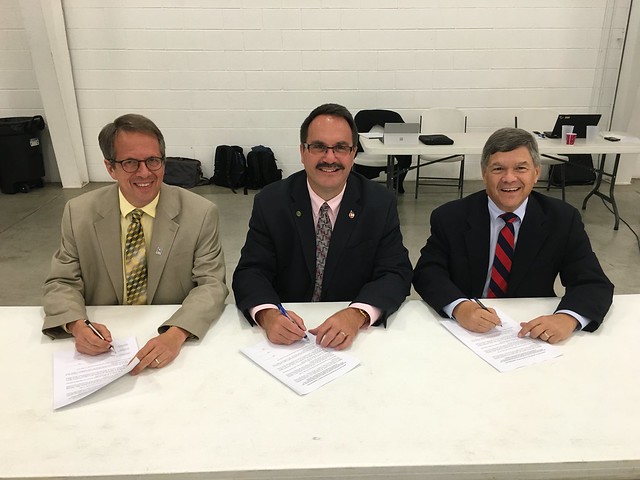